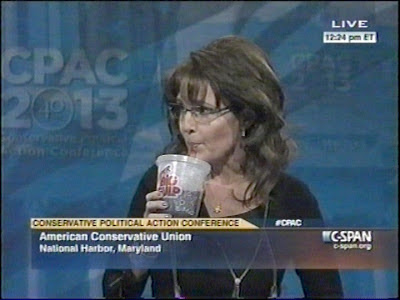 
"Former Alaska governor Sarah Palin is rejoining Fox News as a contributor less than five months after declining the network's offer to renew her contract.

"Palin will make her first return appearance on 'Fox & Friends' next Monday."

Lee sees this as a win-win merging "the most dominant network in cable television with the most influential figure to Tea Party conservatives--who is also a guaranteed ratings draw."

Palin didn't lose from the separation.


"According to a Politico analysis, Palin 'still garnered much of the same coverage in the first four months of this year as she did in 2012' without a Fox News contract:

She's also a ratings draw because of all the nutty lefties who'll have to tune in so that they can continue to nitpick.

She's one of those rare individuals capable of drawing attention without even trying. I read that Jon Stewart was first out of the gate with another attack on Trig....

Salon had a piece claiming that Republicans will run Jeb Bush in 2016...it's already clear that Dems will run Clinton. Palin's bound to have much to discuss.

It will also give her a bully pulpit in speaking to conservatives (40% of American voters) in the run up to the 2014 elections.

That gives the chance of a partial repeat of 2010 in terms of non-establishment Republican candidates winning primaries and elections.

And then there's the chance of significant Democrat losses due to the upheaval implementing Obamacare will cause for many Americans' healthcare. Add to that the Obama administration's growing public scandals of spying on the public and IRS targeting of political opponents. All of these issues requiring defensive responses from Democratic candidates.

She was pretty effective at backing the winners last time.

As for the upheaval: no big deal, as Obama's been out there, campaigning away and raising cash for Dem candidates. When the upheaval hits, he'll be on the links.

Particularly amusing were his campaign speeches late last week, when he stated that "nobody's listening to your conversations" - directly contradicted on Friday when they admitted to Congress that they can listen to anyone they want; the same also applies to emails, etc.

Max, I am amazed that despite most of the media playing down all this, the polls show the American people upset about IRS targeting, data mining of their information, and Benghazi. Benghazi is especially interesting since it has no direct relationship to their lives or the lives of people they know.