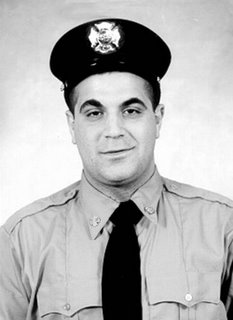 Thomas Anthony Casoria was killed by Al-Qaeda terrorists on September 11, 2001.

Tommy was only 29. He was a firefighter with the New York Fire Department, Engine Company 22. He lived his life in direct opposition to the values of the terrorists. He died trying to save lives.

Tommy responded to the call for help in Tower One of the World Trade Center. Here's what one of his cousins, Jo-Ann Casoria, wrote:

Tommy absolutely loved his job and he loved sharing stories of his workdays with his older brother, Carlo, also a firefighter.

Tommy radioed in his location twice after Tower Two fell. He and two of his "brothers," Vinny Kane and Mike Elferis, were carrying a paraplegic down the stairwell, when a call came in that another firefighter needed aid. Tommy answered that call, as he did many others.

Tommy was engaged to be married. Though he never got the chance to spend those happy honeymoon years with his fiancee, Terri, or raise a family, he left a legacy of love and friendship along with his heroism.

Let me tell you about Tommy. This man was the funniest guy I ever worked with. It was always a blast. Tommy could simulate anyone's voice with great detail. I never worked with anyone like him. What a great guy! Tommy knew what was right and what was wrong. He never crackled under peer pressure. Even when he tried to work for me for Thanksgiving. He stood strong. That was some reaction we got from the Truck, wasnt it, Tom. Maguire got red as a tomato. I remember when he told me he was going to get married. He was so happy and in Love. What a big smile he had on his face. I teased him about "dont do it", however,I thought what a lucky man to be in love this much. Tommy was respected and loved by everyone.

The loss of Thomas Anthony Casoria is not only felt by his fiancee, family, friends and co-workers, but by his country. His heroism and willingness to sacrifice his life for others is an inspiration.

Nice write-up, Terrance. Glad you took part in this.

Thanks, George, for putting me on to this project to honor 9/11 victims and heroes.

Your Michael Curtis Fiore and my Thomas Anthony Casoria are examples of the sort of people who make this country great.

As are you, George.