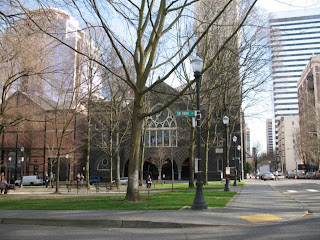 The US population growth trend in the last six years has been to sunny spots not known for rain or snow. Atlanta (up 21.0%), Houston (up 17.5%) and Dallas (up 16.3%) were the top three gainers among larger US metropolitan areas between 2000 and 2006. Much of the growth was due to immigration rather than shifts from other places in the US.

In spite of this data, Mark Abbott, of Oregon State University, and Eban Goodstein, of Lewis & Clark College, think mass migrations to Oregon may be on the horizon due to climate change.

"We expect more contention over water resources much like what we have seen in the Klamath Basin," said Mark Abbott, co-chair of the Governor's Climate Change Integration Group, which is examining what steps Oregon can take to prepare for a warming climate.

Abbott, the dean of the College of Oceanic and Atmospheric Sciences at Oregon State University, said many people are concerned about a large migration of people into Oregon from areas that will be more heavily affected by climate change, such as the U.S. Southwest. Other questions include whether there will be "disproportionate impacts" on human health, such as more heat-related deaths and higher electricity costs among the elderly.

Eban Goodstein, an economics professor at Lewis & Clark College who is studying global warming's economic impacts, anticipates that migration into the region from cities such as Los Angeles and Phoenix will accelerate. "They're unsustainable communities right now in terms of their water supplies. And as temperatures warm up, I would imagine we would see more and more in-migration driven by climate," he said.

What’s interesting about Prof. Goodstein’s comments that both Los Angeles and Phoenix will be sources of migration is that those two cities happened to make the top 10 in population growth in their categories. Los Angeles came in #6 among the “most populated” cities with 4.7% growth and Phoenix came in #10 overall with a whopping 22.4% growth.

Even more interesting is that the one Oregon city that made the top 10 was Bend with a 29.3% population growth. Bend, of course, is on the border between Oregon’s “have” and “have-not” areas of significant water resources--more high desert plateau than rainy forest.

Abbott, Goodstein and other Pacific Northwest scientists and academicians are subscribing to the predictions of the Intergovernmental Panel on Climate Change which met recently in Brussels.

The Oregonian’s Richard Hill explains the panel’s findings this way:

The Pacific Northwest faces an intense tug of war over vanishing water supplies if the region continues to warm as forecasts show, dividing people west of the Cascades from those east as water "haves" and "have-nots." And even abundant water west of the Cascades may be stretched as people fleeing from drier, hotter regions of the U.S. find refuge here.

Scientists base this warning on findings to be released today in Brussels, Belgium, by the Intergovernmental Panel on Climate Change, a consortium of more than 2,000 climate scientists from 130 countries.

Among other things, the American Southwest will face dust bowl conditions as hotter temperatures rob as much as 20 percent of annual rain. But in the Northwest, dwindling mountain snowpack is expected to make summer water scarce especially east of the Cascades, challenging agriculture, river use and human habitation.
[emphasis mine]

Abbott and Goodstein, in true scientific fashion, are putting their assumptions to the test in following predictions which go against current population growth data. If they (and the other 2,000 IPCC climate scientists in the Brussels’ panel) are right, they should be congratulated for seeing beyond current population trends.

However, if there is not significant flight from those fast growing cities in the sun belt (e.g., Phoenix, Dallas, Houston, Los Angeles) to slower growing cities in the rain belt (like Portland), Abbott, Goodstein, et. al., will share in the time-honored “egg on face” syndrome for following trendy thinking rather the clear data right in front of them.

It will be interesting to follow up on these predictions.

For those who want a sample scorecard, here are 2000 to 2006 figures for top population growth cities: