Larry Schweikart Was Right on Iraq 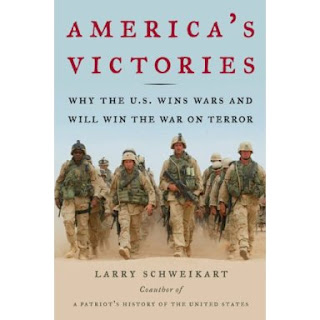 Larry Schweikart, history professor at the University of Dayton, is author of America's Victories: Why the U.S. Wins Wars and Will Win the War on Terror. On June 14, 2006--over a year ago--Schweikart was interviewed about the probability of success in Iraq.

Remember this was long before good news started coming out. Schweikart said the war had already been won in 2004 and the terrorist movement would be in "the death throes" by 2007 or 2008.

If you ask any historian, “When did we win the war in the Pacific?” the answer would almost always be, “Midway.” After that, Japan couldn’t win — the only issue was the final, often gruesome, death toll. Think of that! That’s years before Iwo Jima or Okinawa, and yet historically the war was over after June 1942. Likewise, if you look at the Filipino Insurrection (1899-1902, followed by the “Moro Wars”) — which mirrors Iraq very closely, the war was over when William McKinley was reelected. It took two more years for Emilio Aguinaldo to admit defeat, but his stated goal of forcing a political solution by “un-electing” McKinley was finished. I think we hit the “tipping point” in Fallujah in November 2004. After that, the terrorists could no longer hold up in any town for long, nor could they organize effectively. Zarqawi’s recent death closely resembles our Pacific model as well when American P-38s ambushed Isoroku Yamamoto and killed him. Historically, of the 11 “insurgencies” and “guerilla wars” of the 20th century (including Vietnam), the government (in this case, that would be us) won eight. However, most of these took between five and eight years to win. That places us right on our timetable, which is to expect the death throes of the terrorists in Iraq in another year or two.
[emphasis mine]

Here's a man a president might want to look to for counsel.
Posted by T. D. at 5:33 PM No comments: 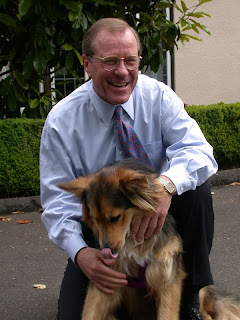 According to KGW-TV, Gov. Ted Kulongoski is looking into taking action in the Baby Gabriel case.

Today Governor Kulongoski said he is waiting for the Attorney General’s Office to tell him if he has authority to step into the case, and if he does have authority, what his options are.

When asked if the boy should be sent to live in Mexico Kulongoski seemed to lean towards keeping him in America.

“If you’re asking me just as a citizen, not based on the law or anything else--the kid’s an American citizen,” he said.

When pressed on whether he wanted to keep Gabriel in Oregon, Kulongoski laughed and said, “I can’t say that. It's just an emotional reaction. It isn’t made on anything--I just have this belief about this country."

KATU has a better review of the legal issue.
Posted by T. D. at 7:12 PM No comments: 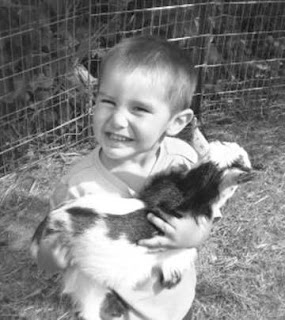 In today's editorial on 2 year old Gabriel Allred, Oregonian editors leave out key issues in the case. The Newport News-Times lays out a ton of facts the Oregonian ignores.

Valiente-Martinez [Gabriel's biological father] is currently serving a prison sentence for a drug conviction. He is also a convicted sex offender, having been found guilty of raping a 12-year-old girl. Valiente-Martinez is scheduled to be released later this month from the Oregon State Correctional Institution in Salem, after which time he will be deported to Mexico because he is in this country illegally.
. . .

"(Valiente-Martinez) gets out (of prison) on Oct. 22, and he's going to be deported immediately," Steve Brandt said. And when Valiente-Martinez gets to Mexico, he intends to move into the home where his mother lives - where DHS is proposing to send Gabriel.

. . .
The Brandts have appealed the Sept. 28 decision by DHS to send Gabriel to live with his grandmother. And, appeals were also filed by Gabriel's caseworker in Lincoln County, by the Newport attorney representing the child, and by a court appointed special advocate working on his behalf. "So there are four appeals," Brandt said. "Everybody filed an appeal who could."
[emphasis mine]

The Oregonian's take is that the case is fueled by bigotry.

Came then the outrage, surely -- shamefully -- inflamed because the border being crossed in this debate is with Mexico rather than, say, Canada.

And that the key issues are cultural and family ties:

Oregon's Department of Human Services did not make this decision on a whim. It made it on a policy that clearly states the primacy of family and cultural ties. Placing rescued children with relatives -- reuniting families -- is a priority for a very simple reason. In the long run, and in the majority of cases, it makes the most sense.

The cultural issue is specious in the case of Gabriel. He was born here and raised here. Surely his culture is American. Added to that, one of his parents is American. So, culturally, it's 2 to 1.

And as the Newport News-Times points out, the DHS professionals who actually know Gabriel, think he should not be sent to his grandmother in Mexico.

Both Steve and Angela Brandt are quick to point out they have been very pleased with the job done by DHS personnel in Lincoln County. "They really have been very good to us," Steve Brandt said. "There's not anybody that doesn't think we're the best place for this kid except this doggone DHS committee that took place on the 28th, and they're all strangers. These are people who don't know Gabriel, don't know anything other than what they're told or shown. So all the local people that have been working with us for 20 months, they don't get a vote. It's just these three strangers.

"They had all this information in front of them when they made their decision," continued Brandt. "They knew about the guy in prison, they knew he would go back to Mexico when released and deported, and yet they still made this decision only based on the fact that he has a blood relative in Mexico."

Shame on the Oregonian for raising a red herring (bigotry), failing to mention key facts, and leaving out that DHS professionals disagree in this case.

As for Oregon DHS, it's time for the Governor to haul in yet another Oregon state agency intoxicated with its rules rather than acting in the interest of those it is supposed to protect.
Posted by T. D. at 6:16 PM No comments: