What has happened to the anti-war movement? And where is the media coverage?

Only a few years ago Portland was paralyzed by thousands of protesters. There were arrests and businesses downtown were vandalized by some of them.

But, the latest effort only garnered a meager 200.

Three years ago there were 10,000 protesters and "Hate Bush" and "Impeach Bush" signs. (photo snip from the front page of the March 19, 2007 Oregonian below) 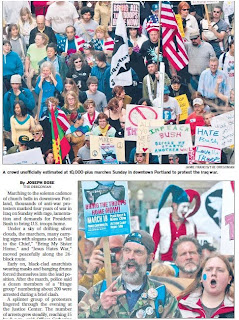 This year's protest had a cute green dragon. The chant "Occupation is a crime, from Iraq to Palestine!" was not directed at President Obama. And there seem to have been no signs calling Obama a criminal (which he would be if "occupation" is a crime) nor calling for his impeachment or saying he should be hated.

And, of course, the protest wasn't front page news as in 2007. What a difference 9,800 protesters and a Democrat president make.

Meanwhile U.S. deaths in Afghanistan have doubled and casualties have tripled from the same period a year ago.


"In total, 57 U.S. troops were killed here during the first two months of 2010 compared with 28 in January and February of last year, an increase of more than 100 percent, according to Pentagon figures compiled by The Associated Press. At least 20 American service members have been killed so far in March, an average of about 0.8 per day, compared to 13, or 0.4 per day, a year ago."

When are the networks going to start ending their newscasts with moments of silence for those killed the previous day in the Afghanistan war?

Here are the two latest U.S. casualties if you want to honor them with a moment of silence.

Publishers Weekly reports that Sarah Palin's Going Rogue finished as the top seller in 2009 among nonfiction hardback books. Going Rogue sold an astounding 2,674,684 copies in about a month and a half--being released November 17, 2009.

Putting that in perspective:

- the next highest nonfiction seller finished almost a million copies behind Going Rogue (Act Like a Lady, Think Like a Man: What Men Really Think About Love, Relationships, Intimacy, and Commitment sold 1,735,219).

- the top fiction seller, The Lost Symbol, sold 5,543,643 about twice as many as Palin's book, but it was released September 15, 2009, and in print twice as long as Palin's book in 2009. John Grisham's The Associate finished in second place among fiction hardbacks with an estimated sales in the 1.5 million range.

- Ted Kennedy's True Compass sold about a third as many copies as Going Rogue and came in fifth in nonfiction selling 870,402 copies.

Newsroom Employment Down 27% in Three Years, But Jobs Not the Major Media Issue

The PEW Research Center reports that newspapers have lost 30% of their editing and reporting capacity since 2000.

That boils down to a 27% loss in reporting and editing jobs in the last three years.


"The shrinking top and bottom line over the last three years resulted in loss of 15,000 full-time reporting and editing jobs falling to about 40,000 wrote Rick Edmonds of the Poynter Institute who authored the report's newspaper chapter. 'That means newsrooms have shrunk by 27% in three years,' he wrote."

Where are the screaming headlines asking why health care, rather than jobs, is the number 1 issue for the ruling Democratic party? Where are the tough questions for the President, Speaker Pelosi or Senator Reid? Or for Oregon senators and representatives?

The Oregonian yawns, and echoes the official spin that Oregon's "flat unemployment" is a "win".
Posted by T. D. at 11:43 AM No comments:

C-SPAN has again shown that presenting clear, complete information from primary sources and serving the public interest are its central motivations.

Unlike other news outlets, C-SPAN under Brian Lamb has sought to bring the full story, unedited and uncensored, to the American people. C-SPAN shows uncut speeches and events. It is not only the preeminent video source on books but arguably the most serious book review source period. No other media outlet has more information on books available every week.

Now C-SPAN is making its vast video archives, including Book TV, available online for free at:

There are over 160,000 hours of programming available and complete files going back to 1987. The video archives are searchable--making them even more valuable.


Programs are indexed by subject, speaker names, titles, affiliations, sponsors, committees, categories, formats, policy groups, keywords, and location. The congressional sessions and committee hearings are indexed by person with full-text. The video collection can be searched through the online Video Library.

The snarky New York Times sees this as a massive "gotcha" file:


The online archives reinforce what some would call the Web’s single best quality: its ability to recall seemingly every statement and smear. And it is even more powerful when the viewer can rewind the video.

However, it really is the video equivalent of putting the Library of Congress online--a marvel obviously lost on the New York Times.

Kudos to Brian Lamb and C-SPAN for deepening their legacy of public interest contributions.
Posted by T. D. at 12:21 PM 2 comments:

Mark Steyn recently took Charles Krauthammer to task for being naive about where the real danger lies in the Netherlands.


These aren't words one has cause to type terribly often, but I think Charles Krauthammer is being deeply naïve in his observations on Geert Wilders (as, reportedly, was Glenn Beck, to whom I am otherwise well disposed, not least because he liked my Christmas single).

Wilders does not need to be lectured condescendingly about distinctions within Islam, because he lives with them every day. And he has concluded, notwithstanding Dr. Krauthammer's views on the precise "minority" that identifies as "Islamist," that Islam itself is the issue — and that, therefore, regardless of the "moderation" of the "overwhelming majority" of Muslims, the more Islam the less Netherlands in any recognizable sense. Are the gangs of gay bashers on the streets of Amsterdam "Islamist" by Krauthammer's definition? Maybe, maybe not. But, either way, they make the running, and the rest of the community is either indifferent or quiescent.

Steyn also points out that Krauthammer misses the importance of the state suppression and the growth of state power in opposing a core value in Western civilization: free speech.


Dr. Krauthammer is also incorrect to suggest there are two issues here. When the state attempts to constrain further Europe's already too shriveled bounds of public discourse, the only issue is state power. The Continental political class does not want to debate the question of its ever more assertive Muslim populations, and so has decided to criminalize that debate. Geert Wilders lives under 24/7 security because Muslims (including the killer of Theo van Gogh) have pledged to murder him. Yet he's the one on trial for incitement? The issue is not Wilders or his views, but the Dutch state and their ever more "extreme, radical, and wrong" views on core Western liberties.

Since Steyn wrote the book (America Alone) on Europe's (and the Netherlands') growing demographic/values crisis and has suffered his own free speech trial where truth was not a defense, Dr. Krauthammer should give a listen.
Posted by T. D. at 12:52 AM No comments: 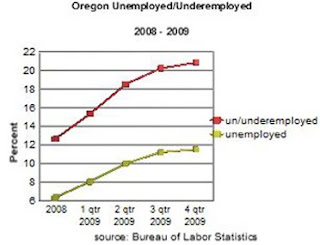 The Bureau of Labor Statistics reports that last year was a disastrous year for the U.S.


Over the year, jobless rates increased in all 50 states and the District of Columbia. The national unemployment rate fell from 10.0 percent in December to 9.7 percent in January, but was up from 7.7 percent a year earlier.

That's bad news, but Oregon's unemployment/underemployment rate is an appalling 20.7%, which puts Oregon as 3rd worst state in the nation (edged out only by Michigan's 21.5% and California's 21.1%).

Though one-fifth of Oregonians are suffering big time from Oregon's poor economy the Democratic legislature and governor talk of federal bailouts and pie-in-the-sky green jobs and pass taxes on business rather than doing anything substantive to help Oregon's employers and workers.
Posted by T. D. at 4:25 PM 2 comments:

Would Reagan Vote for Palin? 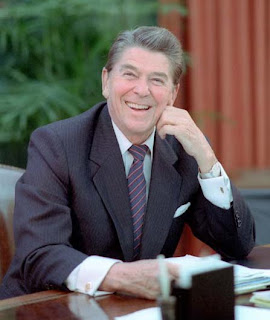 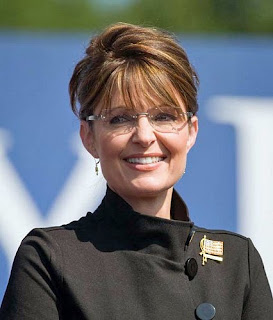 
"Reagan typically described conservatism in populist terms rather than formal ones. In his 'Time for Choosing' speech on behalf of Barry Goldwater during the 1964 presidential campaign, he sounded almost exactly like Glenn Beck does today. 'This is the issue of this election,' Reagan warned: 'Whether we believe in our capacity for self-government or whether we abandon the American Revolution and confess that an intellectual elite in a far-distant capital can plan our lives for us better than we can plan them ourselves.'

"This populist undercurrent is why I am certain that Reagan would have been an enthusiastic supporter of the tea party movement."
. . .
"And who might be able to tap into the potent brew of the tea party? Right now the leading candidate is undoubtedly Palin, whom Reagan would probably have cheered on and surely would have had no problem voting for should she secure the GOP presidential nomination. Like Reagan, she has enormous charisma and a populist style. At her best, such as on the 'Tonight' show last week, she shares his self-assurance and ease in front of a crowd. Like Reagan, she hails from outside the political establishment and does not crave the approval of the elite; rather, she seems to thrive on their disapproval."

Further Hayward says that Palin is a lot like Reagan.


"Like Reagan, Palin consciously speaks in ways appealing more to principle than to party. And like Reagan, she divides people across the political spectrum. Her 'death panels' broadside against Obama may have seemed like cheap demagoguery, but it resembled Reagan's attack against the Panama Canal treaties in 1978: 'We built it, we paid for it, it's ours, and we're keeping it!'

"Virtually all the criticisms of Palin -- calling her an anti-intellectual lightweight who can't name a magazine she reads or a founding father she admires -- were lobbed at Reagan before and during his time in the White House, and the critics hailed from both sides of the aisle. The GOP establishment was very uncomfortable with Reagan, even after he'd won two presidential elections in landslides -- and who can forget Clark Clifford's 'amiable dunce' label?

"Reagan would probably recognize, and approve of, these aspects of Palin's political persona. He knew the power of being an outsider and how it plays well with the people even if it gets bad reviews with the East Coast news media."

Still Hayward thinks that, except on energy, Palin does not yet have the "crispness and rhetorical force of Reagan's formulas" or "a set of signature issues that can carry her particular stamp".


"Palin and the tea partiers might do themselves the most good, however, if they considered Reagan's failures and shortcomings, and his reflections about them, rather than his successes. Would-be GOP presidential contenders love invoking 'tear down this wall' and 'there you go again,' but they should also ask themselves: Why didn't the Reagan revolution succeed in erecting lasting barriers to the government gigantism we are seeing today? Reagan, though usually remembered as a sunny optimist, also sounded a more ominous note: 'Freedom is a fragile thing and is never more than one generation away from extinction,' he said in a 1967 speech. 'It is not ours by inheritance; it must be fought for and defended constantly by each generation.'

"Frustrated with his inability to control a sprawling government and anticipating a climate such as today's, late in his second presidential term Reagan began arguing for a package of five constitutional amendments that he called his 'Economic Bill of Rights.' (Once again he borrowed from FDR, who used the same label for a very different set of ideas in 1944.) Reagan's package included two familiar standbys he'd requested in nearly every State of the Union address he delivered: a balanced budget amendment and a line-item veto. But he added three more proposals: a federal spending limit (revived a few days ago by Republican Reps. Mike Pence and Jeb Hensarling), a 'supermajority' vote requirement for Congress to raise taxes, and a prohibition on wage and price controls."