The Oregonian is no longer ranked among the top 25 U.S. newspapers. The Alliance for Audited Media (AAM) stats for March 31, 2013, do not list the Oregon newspaper that has been a long time member of the top 25.  Last year the Oregonian was number 24 in September and number 21 in March.

I will post current data for the Oregonian when the Oregon newspaper totals come out in the coming week.

AAM reports that in the last year the average drop in newspaper daily circulation was 0.7% and that digital newspaper editions make up almost 1/5th (19.3%) of total circulation.

Newspapers may include digital editions — tablet or smartphone apps, PDF replicas, metered or restricted-access websites, or e-reader editions — in their total circulation. Digital editions now account for 19.3 percent of U.S. daily newspapers’ total average circulation, up from 14.2 percent in March 2012.

*This list is based on combined daily average circulation. San Jose Mercury News is no longer included due to reduction in print frequency and elimination of its five-day average, as noted above.

If you wanna win

I compare the following Skip Bayless commentary with Shep Smith's inept put down of Tim Tebow on his afternoon news show. Shep disdainfully asked why wouldn't the Jets get rid of someone who did nothing on the field last year. Maybe Smith missed the 2011 season when Tebow was a starting quarterback and managed a lot more than the Jets in 2012 (with a very part-time, hardly playing, Tebow), and 1 more playoff win than the Broncos, with a great quarterback, in 2012.

Tebow pulled the Broncos out of an awful season opening of 1 win and 4 losses when he took over as starting quarterback in 2011. He took the Broncos 1 game deep into the post-season with a spectacular overtime win in the AFC wild card playoff with Pittsburgh on January 8, 2012.

By contrast, another of my favorites, Payton Manning, in 2012 had a great season, but no win in the playoffs with the Broncos.

Does this mean Tebow is as great as Manning? No. But, it does mean that Tebow has an amazing ability to win under adverse circumstances when he is the starting quarterback. Skip Bayless points out Tebow's ability to win and the fact that a good number of NFL teams with losing records could use a quarterback like that--if they really want to win.

April 3 - Capt. James Michael Steel, 29, of Tampa, Fla., died in the crash of an F-16 near Bagram Airfield, Afghanistan.

The legacy of Margaret Thatcher speaks for itself. She took Britain from a time of decline and looming bankruptcy to being a strong, world leader again. She did it by holding firmly to common sense, conservative principles. In National Review, Sarah Palin writes:


She put those beliefs into action. Like Reagan, she was a leader for whom word and deed were one and the same. A leader of a conservative think tank behind the Thatcher revolution famously said, “We were not interested in political office for the Conservative party. We were interested in power for them to get things done.” And that’s exactly what Thatcher did. While others in her party were interested in holding on to political office and overseeing “the orderly management of [Britain’s] decline,” she actually radically reformed a broken system and brought it back to free-market principles, leaving her country stronger, wealthier, and a leader in the world when just a decade before it had been dismissed as “the sick man of Europe.” Her push to privatize British industry and lower tax rates led to a substantial economic expansion and became a model for other countries shrugging off the yoke of socialism.

In the 1980's she and Ronald Reagan were bookends in defending the West and freedom which resulted in the fall of the Soviet Empire.

On a more personal level she saw truth even when it was covered with grit and grime. From Palin's Facebook page: 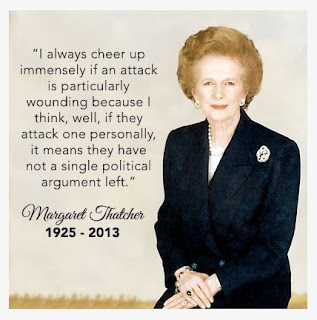 Oregonian: Not Enough Money to Pay Income Tax, But Plenty for Sales Tax

The editors declared that this means that Oregon's income tax-based government is bound to be underfunded at the current level. The fix they propose is a strange one. Not to pare down government services to fit the lower income level of Oregon college grads.* Nor to raise income tax rates on the lower earning college grads. The editors somehow feel that though lower paid liberal arts grads won't have enough money to pay more in (progressive tax) income taxes, they will have enough to pay the needed amount in (flat tax) sales taxes.


But those industries alone likely won't be enough to expand the tax base adequately to sate [Oregon's] appetite for government services.
. . .
The solution is not to encourage workers with liberal arts degrees to go elsewhere. Nor is it to suggest they should work harder. If Oregon wants to keep its soul and its budget both in equilibrium, it needs a better tax system -- one that isn't dependent on income that the city probably won't attract without an overhaul of both its image and its priorities.
. . .
But a sales tax goes against Oregon's progressive soul, you say? The evidence keeps mounting that without one the state will lose the ability to feed its soul.

Does this make any sense? If Oregonians aren't gaining enough to pay extra income taxes, where will they get the funds to pay extra sales taxes?

There is a good argument for switching from the graduated income tax to a flat sales tax (as Washington state funds its government). Everyone paying a flat tax rate means everyone has a stake in how government is run and feels an equal monetary pain when government services expand.** Additionally, there is the wonderful simplicity of figuring and paying the tax.

But to say that there is somehow more money available from the same monetary pool just by adding a new tax rather than raising an old tax is at best illusion and at worst deception.

True there are the funds that would be gained from out-of-state visitors, but that it would make little, if any, real difference is shown by the budget shortfalls that both Washington state ($2.7 billion) and Oregon ($1.7 billion) had to deal with in 2012. Washington's sales tax did not shield from budget woes.

A sales tax isn't the answer. It has not settled any state's income problem. It is a diversion from the real issue that needs to be addressed: rising government costs in a time of lower personal and family income. The lack of editorial comment on the real issue shows why the Oregonian continues to decline as a widely used source of news and commentary.
____
*Interesting that cutting government spending is exactly the fix the Oregonian editors suggest for Oregon's public pension deficit.

**Though it doesn't seem to make much of a practical difference in Washington's and Oregon's voting habits.
Posted by T. D. at 1:45 PM 4 comments: