The State of Oregon and the City of Portland are leading the way in sucking up water resources that leave a "water footprint" denying the rest of the world critical water resources.

That's the fallout from the current UN report on water needs around the world that are quickly growing to dire proportions. It takes massive amounts of water to produce biofuels such as ethanol--70 to 400 times as much water as producing oil.

Water guzzling ethanol is now required by Oregon state and Portland city law. An Oregon state law is ramping up to require all Oregonians to use at least 10% ethanol in their gasoline by September. The City of Portland already implemented a similar requirement last year.

From the AP story:

It's not only our carbon footprint we should worry about, U.N. experts say. They warn about our growing water footprint.

Nearly half the people on Earth, about 2.5 billion, have no access to sanitation, many of them in urban slums. The world's cities are growing by 1 million people a week, and soon their aging water systems will not cope. Farming demand on water is increasing.
. . .
A report published this month by UNESCO's Institute for Water Education in Delft said it takes 70 to 400 times as much water to create energy from biofuels as it does from fossil fuels.

Why is Oregon and the City of Portland leading the way in hogging water resources essential to life? Because its leaders and advisory groups did not do the serious scientific work of studying the implications of proposed policies. (Not even on ethanol's impact on global warming.) They wanted the policy and fudged the science to approve it. Even a perfunctory check with the UN about current ethanol studies would have turned up the fact that massive waste of water resources in producing ethanol was being studied.

In politicizing science, State of Oregon and City of Portland leaders have produced and implemented bad science and harmful policy. They are forcing Oregonians to act like quintessential Ugly Americans who want their own way irrespective of the needs of the rest of the world.
Posted by T. D. at 10:10 PM No comments:

In none of the endless presidential candidates' debates has there been a meaningful discussion of the rights of disabled Americans. However, in the Feb. 26 debate in Cleveland, Barack Obama casually and ignorantly revealed his misunderstanding of the basic issue in the highly visible and still-resonating official death sentence of a disabled woman, Terri Schiavo.

I have repeatedly called her death the result of "the longest public execution in American history."

When moderator Tim Russert asked Hillary Clinton and Obama if "there are any words or votes that you'd like to take back ... in your careers in public service," Obama answered that in his first year in the Senate, he joined an agreement "that allowed Congress to interject itself (in the Schiavo case) into the decision-making process of the families."

When he was a professor of constitutional law, Obama probably instructed his students to research and know all the facts of a case. The reason Congress asked the federal courts to review the Schiavo case was that the 41-year-old woman about to be dehydrated and starved to death was breathing normally on her own, was not terminal, and there was medical evidence that she was responsive, not in a persistent vegetative state.

One of the leading congressional advocates of judicial review was staunchly liberal Democratic Tom Harkin of Iowa, because he is deeply informed about disability rights. By contrast, in all of this inflamed controversy, the mainstream media performed miserably, copying each other's errors instead of doing their own investigations of what Terri's wishes actually were. Consequently, most Americans did not know that 29 major national disability-rights organizations filed legal briefs and lobbied Congress to understand that this was not a right-to-die case, but about the right to continue living.

The National Spinal Cord Injury Association; the National Down Syndrome Congress; the World Association of Persons with Disabilities; Not Dead Yet; and the largest American assembly of disability-rights activists, the American Association of People with Disabilities. AAPD's head, Andrew J. Imparato, has testified before the Senate that: "When we start devaluing the lives of people with disabilities, we don't know where that's going to stop. You also need to take into account the financial implications of all of this. We have an economy that is not doing as well as it once was and ... one way to save money is to make it easier for people with disabilities to die."

I recommend to Obama — if he wants to make amends — that he consult the disability-rights experts at Not Dead Yet for the facts of the Terri Schiavo case and its acute relevance to many Americans in similar situations.

Not Dead Yet is about 12 miles from Chicago at 7521 Madison St., Forest Park, Ill. If this presidential contender and former law professor had bothered to do his own research, he would have discovered — as I did in four years of covering this story and interviewing participants, including neurologists, on both sides, that:

The husband of the brain-damaged Terri Schiavo, Michael Schiavo, had stopped testing and rehabilitation for her in 1993, 12 years before her death. Moreover, for years he had been living with another woman, with whom he had two children, and whom he has since married. Michael Schiavo has continually insisted that he finally succeeded in having Terri's feeding tube removed because he was respecting Terri's wishes — which she could no longer communicate — that she did not want to be kept alive by artificial means.

But at a January 2000 trial — as reported by Notre Dame law school professor O. Carter Snead in "Constitutional Quarterly" (published by the University of Minnesota Law School) in its winter 2005 issue:

Five witnesses testified on whether Terri would have refused artificial nutrition, including water, in the condition she was in. Her mother and a close friend of Terri testified she had said clearly she would want these essential life needs. The other three witnesses said Terri would have approved the removal of her feeding tube.

These last three were in alliance on what became a death penalty: Michael Schiavo, his brother and his sister-in-law!

It was on the basis of that 3-to-2 vote that Florida state judge George Greer ruled that "clear and convincing evidence" allowed him to remove her from life — and then 19 judges in six courts, including federal courts — agreed. Like the press, those judges did no independent investigations of their own. And those careless judges are now joined by the equally irresponsible robot-like judgment of Sen. Barack Obama. He should be proud of the Senate vote he now recants — and learn a lot more about the disabled.
Posted by T. D. at 12:45 PM No comments:

"But we preach Christ crucified, unto the Jews a stumbling-block, and unto the Greeks foolishness; but unto them which are called, both Jews and Greeks, Christ the power of God, and the wisdom of God."--I Cor. 1:23, 24

One would have imagined that, when God sent his gospel to men, all men would meekly listen, and humbly receive its truths. We should have thought that God's ministers had but to proclaim that life is brought to light by the gospel, and that Christ is come to save sinners, and every ear would be attentive, every eye would be fixed, and every heart would be wide open to receive the truth. We should have said, judging favorably of our fellow-creatures, that there would not exist in the world a monster so vile, so depraved, so polluted, as to put so much as a stone in the way of the progress of truth; we could not have conceived such a thing; yet that conception is the truth. When the gospel was preached, instead of being accepted and admired, one universal hiss went up to heaven; men could not bear it; its first preacher they dragged to the brow of the hill, and would have sent him down headlong; yea, they did more--they nailed him to the cross, and there they let him languish out his dying life in agony such as no man hath borne since.

Charles Spurgeon - from the sermon: Christ Crucified
Posted by T. D. at 8:21 PM No comments:

From what I've heard of Sen. Obama's speeches, I like the view he proposes of accepting and working with people of different beliefs and not throwing anyone under the bus--even when they say things that are offensive to others. There should be a slim line of rhetoric that is off the charts--real hate speech like that of Stalin, Hitler or Ahmadinejad.

The troubling thing is that Obama's past political life doesn't demonstrate that he really is accepting of others and willing to work with those he disagrees with.

What in his four years in the U.S. Senate has shown a difference between the way he acts and the way other senators have acted? What has he done to bring the two parties and the nation together? His voting record has been partisan. Is there a single time when he voted with the majority of the opposing party against his own party? Can't remember it.

The only major candidate left standing who has actually worked with those of the other party and different political views is Sen. McCain. There is McCain-Feingold, McCain-Kennedy (which Sen. McCain has paid a political price for), but where is the Obama-(any Republican name) bill? Has he ever paid a price for working with Republicans when the majority of his own party was against a measure?

It's long past time for a change. The baby boomers brought political hatred into the arena with the student protests and riots of the late 1960's and early 1970's. That hatred continued to ramp up. I remember one otherwise reasonable young woman saying she was glad Pres. Reagan had been shot. The politics of hate had seeped deep down.

Can the younger generation turn that around? Can Barack Obama turn it around? Will he really try? 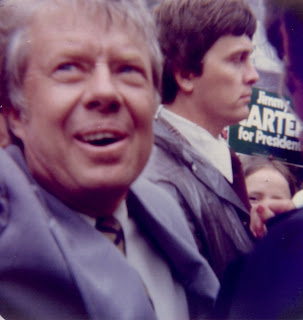 Long ago I initially supported a young changemaker who promised a different sort of politics. He turned out to be the worst president in the last 50 years. The nation was left a mess. There was double digit inflation, the highest interest rates under any US president, high unemployment, oil shortages and the only time I remember in my lifetime when U.S. gas stations had signs out that they had no gas. You had to wait in long lines at gas stations and hope there was still gas by the time you got to the pump. President Jimmy Carter was partisan and self-important. He still is critical of anyone who doesn't bow to his viewpoint--even huffing about President Clinton not allowing him to be more active in foreign policy during the Clinton administration.

One hopes whoever the new president is, he or she will actually follow a new politics mold that brings something better instead of leaving something worse.
Posted by T. D. at 8:20 PM No comments:

Here is the clip from the conversation between William F. Buckley, Jr. and Malcolm Muggeridge about the difficulties of sharing the Christian faith in private settings that I alluded to in my February 27 tribute to Bill. It was recorded September 6, 1980, and broadcast on the Firing Line program titled "How Does One Find Faith". Sharing their faith in Christ was something both men thought about seriously.