Speers & Sue (Chenault) Dodge: I Never Shall Forget the Day

AARP has been presenting lots of ads on the Fox News channel, and is now even "sponsoring" Fox programs.

Since the Fox audience keeps growing, it seems a shrewd financial move. Fox is the most watched cable news station nearly matching all its competitors combined in viewership. Meanwhile the networks keep losing viewers.

Currently the Fox network has the biggest base of seniors not attracted to AARP because of AARP's liberal stance. Since 42% of Americans proclaim themselves as conservatives, Fox may be a key to a huge customer base for AARP.

AARP has shown itself to be savvy in political marketing.

1. AARP is trying to win over conservative seniors and hiding its liberal policies by identifying itself with Fox's popularity among conservatives.

2. The dollar is AARP's real bottom line, and AARP is willing to take on any persona and give big bucks advertising to those identified with opposing its policies in order to sell AARP goods.
Posted by T. D. at 3:06 PM 2 comments:

A Gallup poll released today shows that newspapers and television news rank in the bottom half of major institutions in terms of public confidence. Which institutions inspire less confidence? Only banks, organized labor, big business, HMO's and Congress. 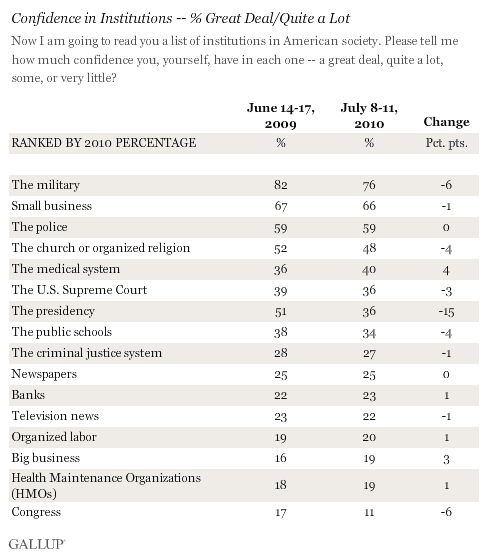 Stimulus is a Success?

Charles Pope of the Oregonian writes:


"WASHINGTON -- Economists generally agree that the largest spending package of all time -- the $787 billion stimulus law of 2009 -- worked as designed, stabilizing a heaving economy, possibly preventing a full-blown depression and freeing up money to pave rutted roads and keep many Americans at work.

"This would seem to be good news for Democrats in a difficult election year. After all, they muscled the bill into law with virtually no help from Republicans.

"According to a July 13 CBS News poll, only 23 percent of Americans think the stimulus helped the economy (down from 32 percent in April). Eighteen percent say it actually made the economy worse, and 56 percent say it had no effect."

Perhaps Pope forgets that the key question we are supposed to ask ourselves about economic policies is: "Am I better off now than before the policy was adopted?"
Are most Americans better off today than they were before the stimulus bill passed? No. Is unemployment lower? No.

Unemployment was under 8% at the time, and we were warned that it could go clear up to 8% if the stimulus package wasn't passed. The expert economists said the same. The stimulus was passed and unemployment went up a good deal past 8%.* It's now hovering about 9.5% nationally and at 10.5% in Oregon. The economists were wrong on the effects of the stimulus package in their initial assessment. Why should they be believed now?

So, it's no wonder that 74% of Americans disagree profoundly with economists and think the stimulus either was a waste of money and made no significant difference or that it actually made things worse by piling up debt--not to mention all the pork projects in it.

Maybe if economists admitted that they were taking a shot in the dark before and really had no idea what the effect of the stimulus would be, they would have more credibility now. But, Charles Pope didn't think to ask them about their poor predictions about the stimulus bill before it was passed.

This points not only to the disconnect between economists and average life reality, but to the disconnect between reporters and average life reality. Most Americans' lives aren't better post-stimulus, and about 10% are really hurting bad. It's too bad Pope and the Oregonian haven't figured that out. Maybe if Pope talked to some average Oregonians instead of politicians and experts who were wrong last time . . . .

*UPDATE 2: When the stimulus bill was passed in mid-February, 2009, the then current Bureau of Labor Statistics report showed US unemployment at 7.6%. Some feared that the stimulus bill's "slimmed-down" form might result in unemployment going over 9%. A rise over 10% wasn't on any of its supporters' radar.

UPDATE: OregonGuy comments that not all economists are disconnected from average life reality--or humility. He cites Greg Mankiw of Harvard who has a very insightful article on this very issue in National Affairs.
Posted by T. D. at 11:28 PM 2 comments:

In the car I'm listening to a lecture series on "How to listen to and understand great music". One of the composers new to me is Josquin des Prez. This piece is intricate and soothing all at once and expresses: "I will say of the Lord, He is my refuge and my fortress: my God; in him will I trust . . . "


"Qui habitat"
Original text and translations may be found at Psalm 91.. The text set by Josquin is the first eight verses of the Latin Vulgate (which is numbered as Psalm 90).

91:1 He that dwelleth in the secret place of the most High shall abide under the shadow of the Almighty. 2 I will say of the Lord, He is my refuge and my fortress: my God; in him will I trust. 3 Surely he shall deliver thee from the snare of the fowler, and from the noisome pestilence. 4 He shall cover thee with his feathers, and under his wings shalt thou trust: his truth shall be thy shield and buckler. 5 Thou shalt not be afraid for the terror by night; nor for the arrow that flieth by day; 6 Nor for the pestilence that walketh in darkness; nor for the destruction that wasteth at noonday. 7 A thousand shall fall at thy side, and ten thousand at thy right hand; but it shall not come nigh thee. 8 Only with thine eyes shalt thou behold and see the reward of the wicked.

TIME's Mark Halperin on why Palin's grizzly ad is so good

Here's Halperin more in depth and in print. Halperin ends his article with:


"Palin thrives on the unpredictable, and as her new video shows, she can adapt quickly. 'What she knows, you can't teach,' says Mark McKinnon, a top strategist for George W. Bush and McCain. And what she doesn't know she can learn — and she's learning fast.'"

Mama Grizzlies on the March

Why Winning in Afghanistan Is Essential

Military historian Victor Davis Hanson has an important column on why the war in Afghanistan can be won and must be won. Here's Dr. Hanson's final point:


"10. We have no choice but victory. A failure in Afghanistan will reenergize radical Islam, as did the Soviet defeat, with implications that will affect everything from the current quiet in Iraq and the nuclearization of Iran to the behavior of Turkey, and the chances of more terrorist attacks within the United States. Failed invasions are more grievous even than lost battles. Those who think we can just leave Afghanistan and call it quits are sorely mistaken. Fairly or not, we are well beyond that: Either we stabilize the country, with all the accruing advantages from that achievement, or we withdraw in defeat and expect to reap a bitter harvest from that defeat."

We either deal with winning the war in Afghanistan or settle down to living in a society in which bombing of your child's school or of your local mall is a reasonable possibility. If we refuse to treat terrorism as an act of war, it will be prosecuted as a crime--like the war on drugs and, unfortunately, probably just as unsuccessfully.

It's worthwhile reading the whole column (as is the case with everything Dr. Hanson writes). Hanson points out a number of overlooked strengths for winning and overblown weaknesses that supposedly point to losing. We need more counselors like Hanson who understand military history and are able to apply its lessons to the present.
Posted by T. D. at 10:19 PM No comments:

Presidential Scholars Not So Scholarly 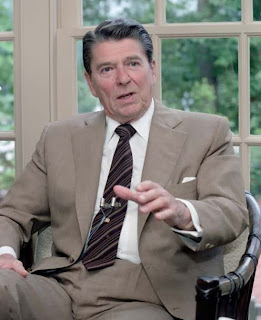 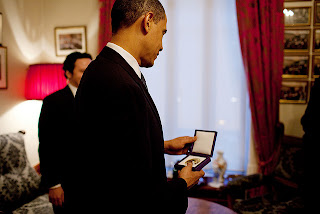 Politico reports that a poll of "238 presidential scholars at U.S. colleges and universities" finds Barack Obama at #15 beating out Ronald Reagan at #18 in the "best president" category.

This is why we still quote William F. Buckley, Jr.'s famous statement on governance:

One wonders if Obama's embarrassing Nobel Peace Prize nomination came from bright minds like these.  Here's another honor for having done, well, not much.  With friends like these . . . .

Ronald Reagan as president presided over the ending of the 40+ year Cold War that had bedeviled six previous presidents and had erupted into two "hot" wars resulting in about 90,000 US deaths and a quarter of a million non-mortal woundings.

Economically, Obama started out with a much smaller misery index of 9.61 left by George W. Bush. As of 1-1/2 years into Obama's first term, the misery index has increased about a fifth to 11.5 (inflation at about 2% and unemployment at 9.5%).

It's perhaps not fair to compare Obama's record in Afghanistan to Reagan's winning the Cold War with superb diplomacy and without firing a shot. After all, Reagan had two terms.

Still, the smashing military/diplomatic victory by Reagan and clear economic progress made in his first two years, and Obama's worsening of an economy half as bad as the one Reagan faced in 1981, leaves one puzzled as to what is in the heads of these presidential "scholars".

It again underlines the wisdom of plain old "first 2000 names in the phone book" democracy over aristocracy--especially "university scholars" aristocracy.
Posted by T. D. at 8:00 PM No comments: