COVID vaccine persecutors are making enemies among the vaccinated. I'm one of them and will do everything in my power to make sure their disgustingly oppressive tactics result in less future vaccinations rather than more.

KATU reports that the Springfield school district is treating those it has given exemptions to the same as those without exemptions. That is, they are granting religious and medical "exemptions" in name only as well as making sure the teachers can’t get teaching work elsewhere.

"The school district says Springfield has 101 unvaccinated employees, and as of November 1st; 16 of them will no longer be employed with SPS. According to a memorandum between the School District and the Springfield Education Association, educators who fail to comply will be put on unpaid leave effective October 19th through the remainder of the school year.

"However, some teachers say they are being dealt the same outcome, despite being granted exceptions.

“'So the exception was received by the district but our accommodation is that we're placed on unpaid leave the rest of the semester,' says Karri Thiele, a kindergarten teacher at Page Elementary.

"Thiele was granted a religious exception by the district, but says the only accommodation offered to her and around 50 fellow coworkers was being put on unpaid leave effective Tuesday, which Thiele says entails no access to accrued sick time or health benefits. Teachers are also unable to find jobs teaching elsewhere, while still contracted to SPS.

“'Unless I resign my position with Springfield, I am unable to use my teaching license for the remainder of the school year,' says Thiele, who feels the district is holding unvaccinated teachers 'hostage.'”

Meanwhile the U.S. Navy is threatening to punish those who do not get vaccinated by not only discharging them but threatening to make them refund bonus incentives and pay for training they have received as well as possible court-martial.

"Officers may be subject to 'recoupment of unearned special or incentive pays' in select cases. The COVID authority also 'may seek recoupment of applicable bonuses, special and incentive pays, and the cost of training and education for service members refusing the vaccine' from sailors, the order also says.

From the U.S. Navy Office of Information:

"For Navy service members refusing the vaccine, the CCDA also retains the authority for administrative processes regarding removal of warfare qualifications, additional qualification designations (AQD), Navy Enlisted Classifications (NEC), or sub-specialties, except in cases where removal authority is otherwise authorized by law or Executive Order.  The CCDA may also seek recoupment of applicable bonuses, special and incentive pays, and the cost of training and education for service members refusing the vaccine.

"Those separated only for vaccine refusal will receive no lower than a general discharge under honorable conditions. This type of discharge could result in the loss of some veterans’ benefits."

I originally got the vaccine and helped others get it because it seemed reasonable medically. But, no more. Political and military authorities, along with fat cat medical corporations like Kaiser Permanente, have made it a political and moral issue. They need to be opposed.

Kaiser Permanente: We will be safe when we are all vaccinated. Me: Not really.

My father just received a letter from Kaiser Permanente (KP) in response to our concerns over KP depriving people of their livelihood irrespective of their excellence as health care providers. It said, among other things:

"The large number of unvaccinated individuals has created an increased risk for everyone, and we must do all we can to protect ourselves, each other, and those we serve."

"The majority of our frontline health care workers have already been vaccinated, and Kaiser Permanente required that all employees and physicians be fully vaccinated (or apply for medical or religious exemption) by September 30, 2021."

Apparently KP does not pay attention to Oregon Health Authority statistics. Currently almost 1/4th of all COVID cases are vaccinated "breakthrough" cases. And about 1/5th of all COVID deaths in August and September were vaccinated. That means that vaccinated people are a significant carrier of COVID. And as the significant death rate indicates, these cases are not the "light" cases we have been promised the vaccine would ensure. 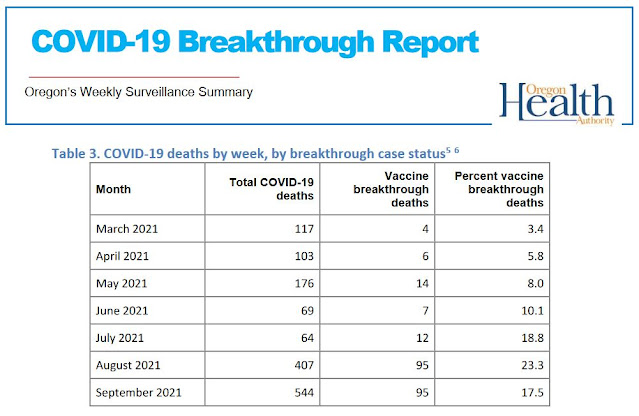 So, we are depriving people of their livelihood for slightly better odds. Given that 75% of Oregonians are vaccinated, your chance of rubbing shoulders with them is much higher than with the 25% unvaccinated. So, though the vaccinated rate of infection is lower, you have three times as much interaction with them than with the unvaccinated. It sort of evens out as to which group is more likely to give you COVID.

From The Epoch Times (article behind a paywall):

A hospital in Colorado rejected a woman for a kidney transplant after she refused to get a COVID-19 vaccine, officials have confirmed.

Leilani Lutali received a letter on Sept. 28 informing her that the transplant team at the University of Colorado Hospital decided to designate her inactive on the waiting list for transplants.

“You will be inactivated on the list for non-compliance by not receiving the COVID vaccine,” the letter states.

If Lutali continues to refuse to get a vaccine, she “will be removed from the kidney transplant list,” it added.

Neither Lutali nor her designated donor, Jaimee Fougner, have received a COVID-19 vaccine. Fougner hasn’t for religious reasons, while Lutali believes there isn’t enough known about the vaccines, they told KCNC-TV.

According to Lutali, hospital officials previously said vaccination wasn’t required to get a transplant.

We found out the one of our favorite medical providers at Kaiser Pemanente is "no longer available". Nationwide Kaiser has put 8,000 on "unpaid administrative leave" soon to turn to termination if they don't get vaccinated. According to the Oregonian (if you can believe them),  190 local medical professionals have been put on "unpaid administrative leave". A screenshot from a recent Oregonian email headline blast.

Be prepared for denial of medical treatment if you are not vaccinated (doesn't matter if you have had COVID and have natural antibodies). This isn't about science or medicine. It's about politics and ability to force people to do the will of those who rule.

Consider this: 75% of Oregonians have been vaccinated, but still last week 24.4% of current COVID cases in Oregon come from the vaccinated. They are called breakthrough cases. Notice the percentage rise in the last 6 weeks from 18.9% to 24.4%.

Persecution has already started. Look at the willing collaboration of the big medical insurance/provider companies to terminate their people even though there has not been a significant outbreak shown to come from non-vaccinated medical personnel. The Colorado hospital case shows that persecution will spread to include non-treatment of patients who refuse vaccination.

If it does, I will ask Kaiser Permanente to drop my name from their vaccinated list. I'd rather be like the story* of the many Norwegians who came out with a star of David on their sleeves after the Nazis required that all Jews in Norway wear that sign. I want to join the persecuted rather than stay with jackbooted persecutors.