August 20 - Sgt. 1st Class Matthew I. Leggett, 39, of Ruskin, Florida, died in Kabul, Afghanistan, of injuries received when he was engaged by the enemy.

August 22 - Sgt. Christopher W. Mulalley, 26, of Eureka, Calif., died in Gardez, Afghanistan, as the result of a non-combat related incident. The incident is under investigation.

September 16 - They died in Kabul, Afghanistan, of wounds suffered from an enemy attack. Killed were:
- Maj. Michael J. Donahue, 41, of Columbus, Ohio.
- Stephen Byus, 39, of Reynoldsburg, Ohio, a member of the Defense Logistics Agency Land and Maritime in Columbus, Ohio, working as a supply specialist, and assigned to the Combined Security Transition Command Afghanistan while deployed.

October 1 - Maj. Jonathan D. Walker, 44, of Merriam, Kansas, died in Doha, Qatar, of a non-combat related incident at Camp As Sayliyah. The incident is under investigation.

- Cpl. Jordan L. Spears, 21, of Memphis, Indiana, was lost at sea Oct. 1 while conducting flight operations in the North Arabian Gulf. He was initially classified as a non-global war on terrorism casualty.

October 23 - Lance Cpl. Sean P. Neal, 19, of Riverside, California, died in Baghdad, Iraq, from a non-combat related incident. The incident is under investigation.

October 24 - Cmdr. Christopher E. Kalafut, 49, of Oceanside, California, died in Doha, Qatar, of a non-combat related incident at Al Udeid Air Base. The incident is under investigation. 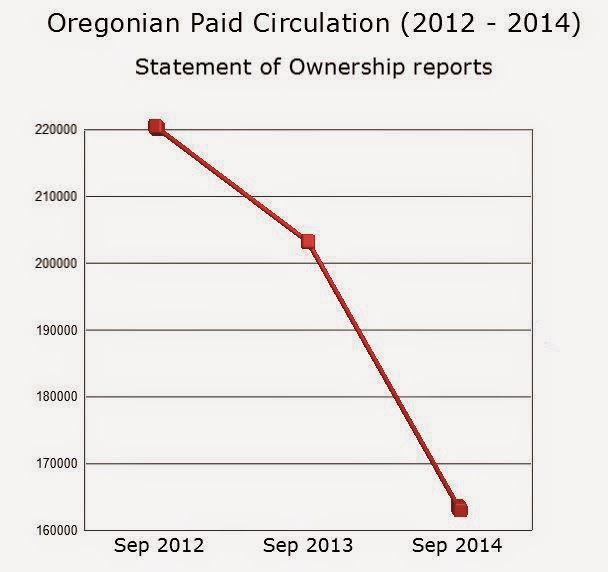 Alliance for Audited Media (AAM) reports have become worthless to track circulation statistics. AAM statistics now can count as five subscribers an individual who accesses the same newspaper edition via print, desktop, laptop, tablet, and smart phone. AAM also includes "branded" editions which are free editions made up of a tiny amount of article content and lots of advertising circulars.

So, anyone interested in serious study of a newspaper's true circulation status has to rely on the annual report (Statement of Ownership) required by law that is included in newspapers and magazines. The Oregonian prints its report in an October edition, the latest report coming out on October 17, 2014, for the daily edition.*

That's more than a 25% drop in two years.  Ouch!
__________
*There is also a report on the Sunday edition that was published in the October 19, 2014 (Sunday) edition.
**Comparison with AAM statistics prior to 2012 is ballpark possible, but there is a difference. For example, AAM's September 2012 paid circulation figure was 228,599 compared to the Statement of Ownership report of 219,917. AAM's figure is about 4% above the Statement of Ownership report, This could be due to the changing AAM metrics which started in 2011.

Pew Research Center again has an interesting poll up. This one is on how trusted major news sources are across the political spectrum. The only major news source trusted about the same by liberals, moderates and conservatives is the Wall Street Journal. Interesting that liberals trust it a little more (35%, 34%), and moderates (28%) trust it the least. Conservatives are in the middle (32%, 30%).

In overall trusted average, the Wall Street Journal (31%) rates 11th, just behind the New York Times (34%) and USA TODAY (33%), which are the top trusted newspaper sources.

It would be interesting to find out what percentage of people irrespective of political position trust these sources. Since about 38% of Americans self-identify as conservative, 34% as moderate, and only 23% as liberal, weighting the responses by those indicators gives a ballpark figure.

Charles French and John S. Foote's study Juvenile Justice in Oregon gives a grim view of the effectiveness of the current juvenile justice philosophy in most Oregon counties. Three of the counties (Multnomah, Washington and Clackamas) include 45% of Oregon residents. They have bought into the Annie E. Casey Foundation philosophy that limiting youth detention and lower involvement of formal justice institutions such as the courts in their cases will result in less juvenile crime.

The idea is that through an evaluation process it be can determined which juvenile offenders are most likely to need official intervention and the others are better left to their normal home environment. An expected side benefit is that a lower incarceration rate will mean lower state expenses to house and oversee juvenile offenders.

The Casey-implanted philosophy of fewer detentions and interventions as regards juvenile offenders is in opposition to Oregon's stated statutory philosophy of "'early and certain intervention and sanctions' as the most effective way to hold juveniles accountable for their criminal behavior. (ORS4l 9C.00 1 )"

In at least one area of juvenile crime, adolescent drug abuse and resultant drug addiction, Oregon’s performance in the Casey Foundation era borders on catastrophic, deteriorating over a decade from better than average to the second worst rate in the nation. In Oregon today, as many minors use illegal drugs as drink alcohol. (p. 4)

Oregon did well only in juvenile violent crime arrest rate. Oregon scored below the national average at 38th highest in the nation. However, as French and Foote point out it is exactly in the violent crime area that there is much less discretion on applying Casey standards because juveniles ages 15 and up are treated as adult offenders.

Multnomah County has paid $6,000 for an analysis critical of French/Foote "logic", but has not denied the facts presented. 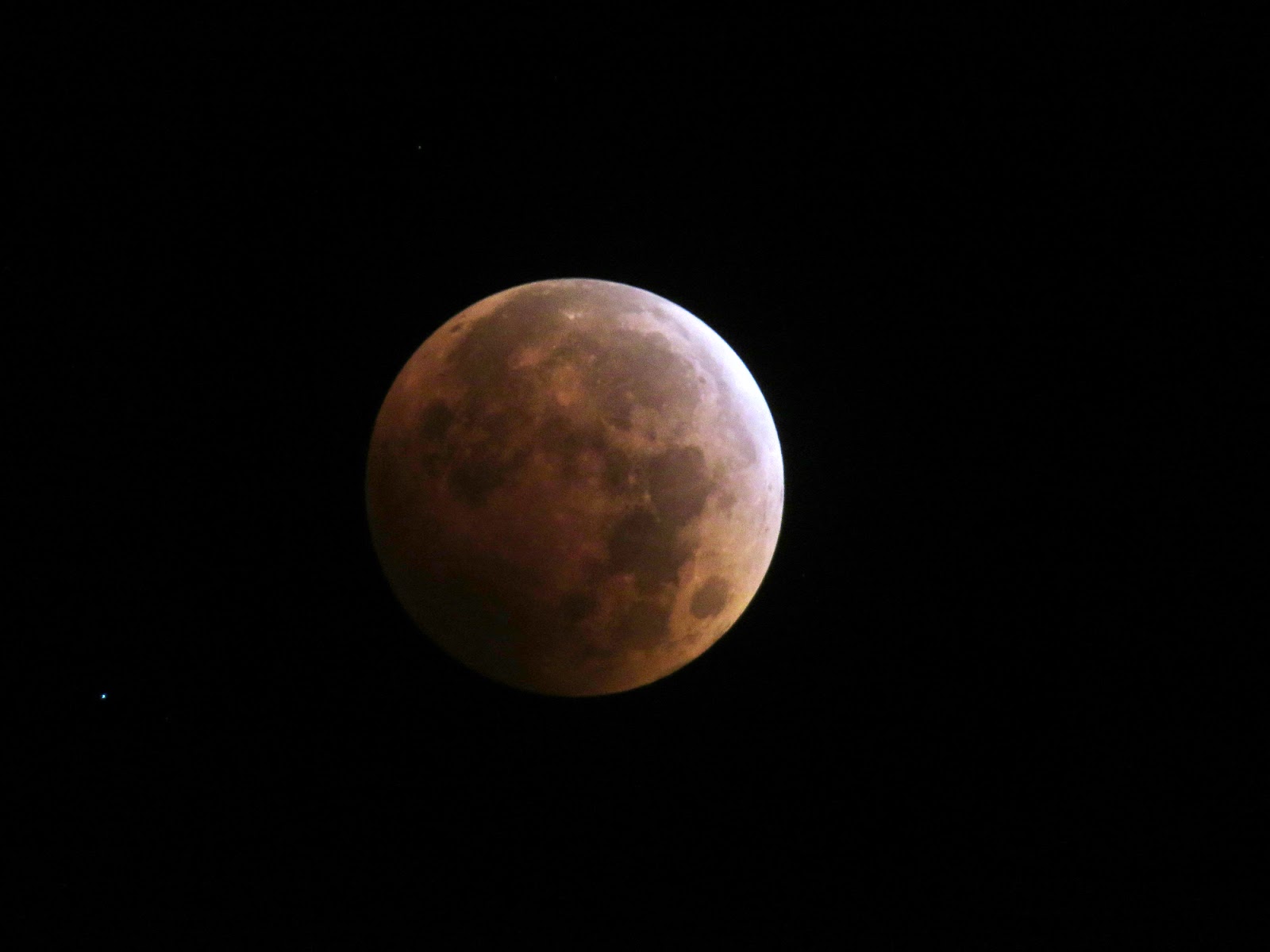 The clear sky last night to see this was a blessing from the Lord. This photo was taken near the darkest point  at 3:56 am (and has been enhanced in Photoshop).  I used a Canon SX50, and this shot was taken with a 1 second exposure, f6.5, ISO400, 1200mm equivalent.

What great beauty--just because of a shadow. It puts me in mind of the verse that says God rested after the six days of creation. Even this "little" piece of process creation is first class work.