From the Anchorage Daily News:


"Incumbent Lisa Murkowski has conceded to challenger Joe Miller in the Republican primary for U.S. Senate.

"Speaking to reporters at her campaign headquarters in Anchorage, Murkowski said 'based on where we are right now, I don't see a scenario where the primary will turn out in my favor.'"

Chalk up a huge political win for Joe Miller as well as former Governor Sarah Palin and the Tea Party.

One wonders if soon to be former Senator Lisa Murkowski wishes she hadn't been so snarky to Palin these last two years. Oh, the slings and arrows of political pride.
Posted by T. D. at 8:05 PM No comments: 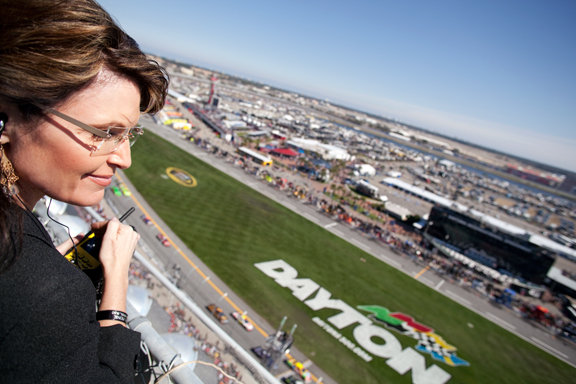 Of 30 endorsements in elections held to date, Sarah Palin has picked winners in 20 of the political contests. That's a 66% win rate for candidates many of whom were very unlikely winners.

What's interesting is that the Washington Post, which is tracking Palin's endorsements with high profile graphics, is not similarly tracking President Obama's endorsements. Could it be because the President has such a dismal record*? Not even close to blind chance of 50/50. And there are no long shot endorsements as most of Palin's picks are.


"And it’s not simply candidates that she gets right. Her death-panel zinger not only revealed an underlying truth about ObamaCare’s plans to ration care; she also managed, with a hot button phrase, to electrify critics and infuriate defenders of the bill. Her populist appeal, and sometimes overdone criticism of elite media, was in 2008 a precursor of the Tea Party movement — conservatism that is anti-establishment, small-government-minded, and celebrates individual responsibility."

What could this mean to 2012? That Palin's special understanding of the American people is the key to guiding the U.S. out of its current problems? Both Rubin and John Dickerson think it possible.


"Now, being a political soothsayer and a superb judge of talent (she plucked Nikki Haley out of obscurity by watching a single video) doesn’t ensure a successful candidacy or an effective presidency. But it’s not nothing. And having experienced an over-credentialed pseudo-intellectual president who lacks a basic understanding of the American people, the public may find something refreshing about someone who 'gets' what the country is about. Palin knows what to look for in candidates because she is in sync with the center-right zeitgeist. If she knows what the country is about and what makes it successful, the argument would go, she might possess, as [John] Dickerson explains, 'a special light to guide the country out of the muck.' (This was the secret to Ronald Reagan, by the way. It didn’t matter what the issue was — he would get it 'right' because he instinctively understood the superiority of free markets, the destiny of America, and the character of his fellow citizens. Yes, all caveats apply, and Palin is not Reagan.)"

___
*There are the high profile losses in Massachusetts (Coakley), Pennsylvania (Specter), New Jersey (Corzine), Virginia (Deeds). There were a couple of wins in Colorado (Bennet) and Arkansas (Lincoln), but Lincoln is 28 points behind her Republican challenger, and Bennet is iffy at nearly 3 points behind in his race.
Posted by T. D. at 11:31 AM 2 comments:

Jews Leaning Republican Up More Than 50% In Two Years

A recent Pew Research Center Poll shows a growth from 20% of Jews who were Republicans or leaned Republican in 2008 to 33% in 2010.

This seems to indicate not only a disaffection with the Democratic Party, but particularly in terms of high hopes Jewish voters had for Barack Obama. The percentage of Republican or Republican leaning Jews in 2006 was 26%. Six percent left the Republican side in 2008, but 6% have come back in just two years joined by 7% more.

Certainly the coolness of Obama administration policy toward Israel and courting of the Muslim block has had an impact on a group that used to be solidly Democrat and liberal.

With 60% of Jews still leaning Democrat and left, there's no imminent danger of Jews turning conservative or Republican, but it is a warning sign when a third of Jews now identify more with Republicans than Democrats. It's possible that this is the start of the same sort of shift that turned the majority of blacks from being Republicans to being Democrats in the 1960's after nearly a century of being solidly Republican.

H/T David Kaplan of NewRealBlog
Posted by T. D. at 3:47 PM No comments:

Get involved in the 2011 Resurrection Sunday dance:

As you may already know, we are in the process of organizing a worldwide dance on Easter Sunday, April 24, 2011. If you would like to join us in this exciting event register your group by email at info@uptofaith.com . In the email please provide your church’s name, home page address and number of expected participants.

When considering participation please keep in mind the following requirements:

* The date of the event will be April 24, 2011
* Participation is restricted to Christian churches
* Minimum number of participants is 200 persons per registered group (if you are a small church desiring to take part, we encourage you to team up with other churches in your area)
* When applying it is understood that you accept the mission Statement of this event
* Your performance must be recorded with multiple HD cameras. The UptoFaith team will create a video from the clips received.

Join us as we “go tell the world” that Jesus Christ and the Church are alive and making a difference!

Rev. Jim Wallis, executive director of the non-profit Sojourners, preaches social justice. But, apparently he doesn't mind receiving a wage (from a non-profit organization) that puts him and his family in the top 7% of American families.

The 2006 data on U S family income breaks down as follows:

A salary way out of line with what most American families get may not be inappropriate for someone running a $7 million dollar profit making business. But, how about for someone heading a non-profit, non-tax paying organization dedicated to "articulate the biblical call to social justice" and who regularly condemns others for their non-social justice views and lifestyles?

H/T Jay Richards [even though about a different Wallis issue]
Posted by T. D. at 6:29 PM No comments:

From research at the Buck Institute for Age Research:


"Researchers transplanted the iPSC [human induced pluripotent stem cells]-derived neurons into rats that had mid-brain injury similar to that found in human PD. The cells became functional and the rats showed improvement in their motor skills. Zeng said this is the first time iPSC-derived cells have been shown to engraft and ameliorate behavioral deficits in animals with PD. Dopamine-producing neurons derived from hESCs [human embryonic stem cells] have been demonstrated to survive and correct behavioral deficits in PD in the past."


"'These cells are reprogrammed from existing cells and represent a promising unlimited source for generating patient-specific cells for biomedical research and personalized medicine,' said Zeng, who is lead author of the study. 'Human iPSCs may provide an end-run around immuno-rejection issues surrounding the use of human embryonic stem cells (hESCs) to treat disease,' said Zeng. 'They may also solve bioethical issues surrounding hESCs.'"

"In U.S., Confidence in Newspapers, TV News Remains a Rarity"

That's the headline for the Gallup finding that only 25% of Americans have "a 'great deal' or 'quite a lot' of confidence" in newspapers and TV news. Already anemic trust dropped 10% between 2003 to 2007 to the current 25% level.

Each Oregonian Owes $1,859 in State Debt

Of course, this doesn't include our individual share of the national debt which is at this moment $42,851 per person.