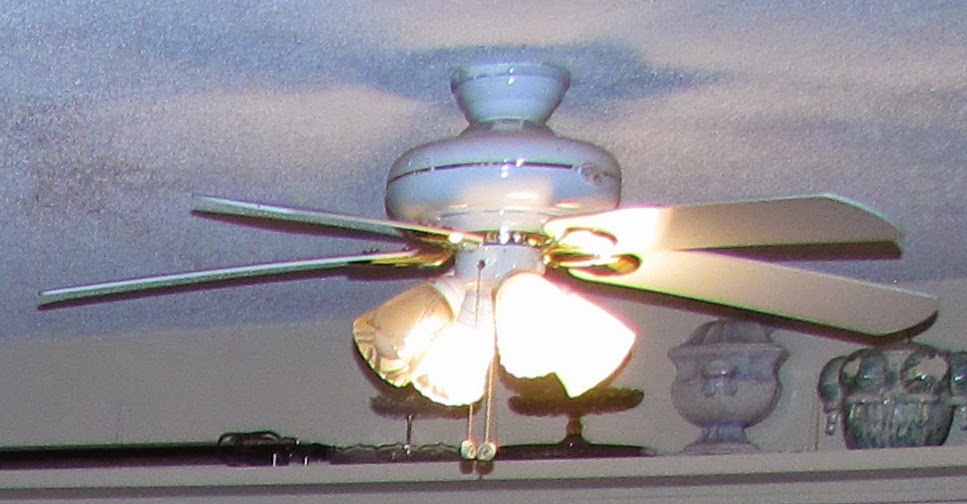 There are a lot of different Hampton Bay Model AC 552 units with completely different configurations. Ours is a four light unit. The unit stopped working after about 20 years of use (not bad!). So, we needed to take it down.

First: Make sure all power is off to the unit/room.

Removing the glass light fixtures was easy. Just press in two metal fingers that hold each of them in place.

Removing the light fixture was also easy with three phillips screws to be removed and the plastic electrical assembly wire unit unhooked (via a push in tab).

Then the blades were taken down by turning each blade to a cut out section of the metal plate below them (held on with a nut that cannot be easily removed and is not supposed to be removed) and taking out the two phillips screws that hold each of the five fan blades in place.

That left the main unit with no clear way to get it down. The screws at the very top were hidden. You access them by turning the unit counter-clockwise. This may be hard to do if the unit has been in place for a long time. We took a butter knife and ran it around the top of the unit between the unit and the ceiling, and that loosened it enough to turn it the inch or so to reveal the screws.

Remove the screws and lower the unit to allow taking off the plastic caps and unhooking the wires. Again: Make sure all power is off to the unit/room and even then treat the wires as though they were live by only touching the wire casing.

The only tricky part is revealing the hidden screws at the top of the unit (which is why I am posting this). My brother knew about them. We were at a standstill in removing it without his help.

May 3 - Pfc. Daniela Rojas, 19, of Los Angeles, California, died in Homburg, Germany, due to a non-combat related illness.

May 11 - Chief Warrant Officer Deric M. Rasmussen, 33, of Oceanside, California, died in Mazar E Sharif, Afghanistan, as the result of a non-combat incident.

May 28 - Pfc. Jacob H. Wykstra, 21, of Thornton, Colorado, died in Kandahar Province, Afghanistan, of injuries sustained as a result of an aircraft accident. The incident is under investigation.

June 2 - Capt. Jason B. Jones, 29, of Orwigsburg, Pennsylvania, died in Jalalabad, Afghanistan, of wounds received from small-arms. The incident is under investigation.

- They died in Gaza Village, Afghanistan, of wounds suffered while engaged in a combat operation. The incident is under investigation. Killed were:
- Staff Sgt. Scott R. Studenmund, 24, of Pasadena, California;
- Staff Sgt. Jason A. McDonald, 28, of Butler, Georgia;
- Spc. Justin R. Helton, 25, of Beaver, Ohio;
- Cpl. Justin R. Clouse, 22, of Sprague, Washington; and
- Pvt. Aaron S. Toppen, 19, of Mokena, Illinois.
Statement from Pentagon Press Secretary Rear Adm. John Kirby:
"Five American troops were killed yesterday during a security operation in southern Afghanistan. Investigators are looking into the likelihood that friendly fire was the cause. Our thoughts and prayers are with the families of these fallen."

- They died in Mirugol Kalay, Kandahar Province, Afghanistan, of wounds suffered when the enemy attacked their vehicle with an improvised explosive device. Killed were:
- Staff Sgt. Benjamin G. Prange, 30, of Hickman, Neb.; and
- Pfc. Keith M. Williams, 19, of Visalia, Calif.

July 28 - Boatswain’s Mate Seaman Yeshabel Villotcarrasco, 23, of Parma, Ohio, died as a result of a non-hostile incident June 19 aboard USS James E. Williams (DDG-95) while the ship was underway in the Red Sea.

August 5 - Maj. Gen. Harold J. Greene, 55, of Schenectady, N.Y., died in Kabul, Afghanistan, of wounds suffered when his unit was attacked by small arms fire. The incident is under investigation.


"The two-star U.S. Army general who was killed in Afghanistan in an insider attack Tuesday was a native of upstate New York who held three advanced degrees from USC and whom colleagues described as a family man and a brilliant logistician with a quick sense of humor.

"Maj. Gen. Harold J. Greene, 55, known to friends as Harry, was believed to be the highest-ranking U.S. military official killed in action since the war began in Afghanistan in 2001. The shooter, who was wearing an Afghan army uniform, was also killed in the attack near Kabul, but not before he wounded 14 others."

Searching online revealed nothing about roku headphone jack problems and neither did a search on the roku site.

So, I did the most basic thing. I removed the batteries and put them back in the remote. It worked. Somehow the remote just needed to be reset.


A recent Kaiser Family Foundation poll finds that 53% of Americans have an unfavorable opinion of the new healthcare law. This is the highest unfavorable response since the poll was first taken in April of 2010 just after the Affordable Care Act was passed.


After remaining steady for several months, the share of the public expressing an unfavorable view of the health care law rose to 53 percent in July, up eight percentage points since last month’s poll. This increase was offset by a decrease in the share who declined to offer an opinion on the law (11 percent, down from 16 percent in June), while the share who view the law favorably held fairly steady at 37 percent, similar to where it’s been since March.

It looks like the undecideds are breaking against the law. Also, Democrats and Independents as well as Republicans are liking the healthcare law less.

Some of the details:

York draws the conclusion that Obamacare is hurting more people by making them pay higher premiums than it helps by giving them better access to health care coverage.

Overall, the numbers reflect Obamacare's design; it was intended to offer taxpayer-subsidized health coverage to a relatively small group of people (the roughly 15 percent of the population that had no health coverage) by imposing costs on the far larger group who had coverage and were satisfied with it. Given that, it's not surprising more people report a negative than positive Obamacare experience.
[emphasis added]

By contrast, Kaiser's big takeaway is that a majority still want Obamacare to be improved (60%) rather than repealed and replaced (35%). This divide has remained fairly stable despite rising disapproval of Obamacare.
Posted by T. D. at 5:02 PM 4 comments: