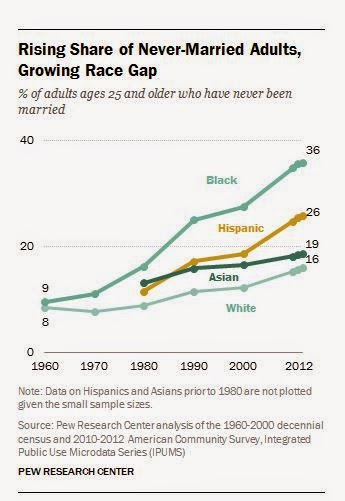 There has been a lot of coverage of the demise of the black family structure. Hispanic families are joining that danger line.

"The share of never-married adults has gone up for all major racial and ethnic groups in the U.S., but the rate of increase has been most dramatic among blacks. Among black adults ages 25 and older, the share who has never been married has quadrupled over the past half century—from 9% in 1960 to 36% in 2012. For whites, the share has doubled (from 8% to 16%). 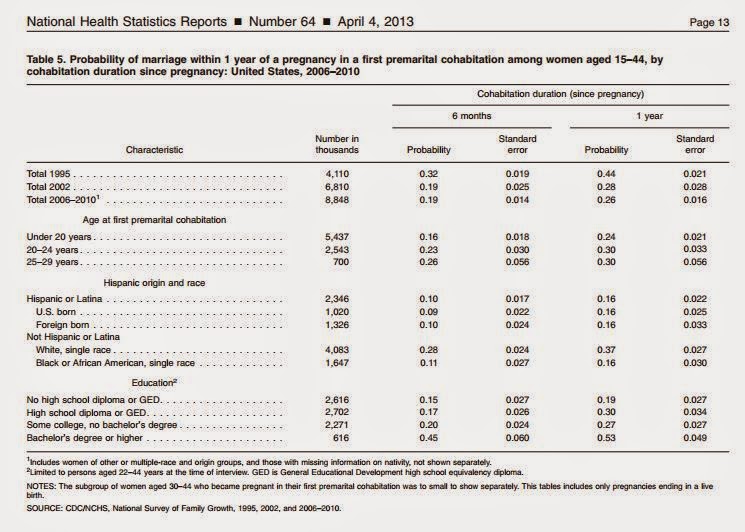 Pew links to a National Health Statistics Report on cohabitation rates. The data shows that white woman are two to three times as likely to get married when a pregnancy results from cohabitation as black or Hispanic women.


This does not bode well for communities that have traditionally valued family/community over rugged individualism. One wonders if the U.S. welfare structure and encouragement of family break up by not enforcing border security and immigration laws have been a major factor in decline in marriage among Hispanics.

It also calls into question the impact of the church (especially Protestant for blacks and Catholic for Hispanics) on these communities. Their values seem to be coming from surrounding societal circumstances rather than from the church.

Pew Research Center has found that 72% of Americans think religion is "losing influence in American life". A solid majority (56%) think this is a "bad thing".

"Nearly three-quarters of Americans (72%) now say that religion is losing influence in American life, the highest share to hold this view in Pew Research surveys going back to 2001.

"As in previous surveys, most people who say religion is losing its influence in American life see this as a negative development, with 56% of the public as a whole saying it is a 'bad thing' that religion is losing sway in the U.S." 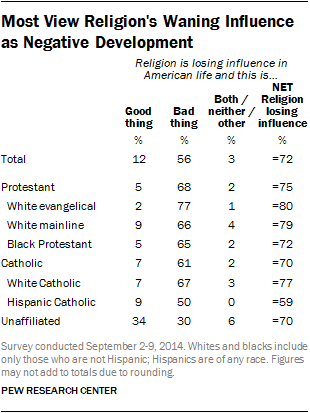 (Apparently Pew Research found Black Protestants for this poll, who they missed for a previous poll. However, there are now no Hispanic Protestants or Black Catholics. What's with Pew Research?)
Posted by T. D. at 1:01 PM 6 comments:

Portland Scenes: Dog on Max; Low Slung Pants; For Those Who Identify

MaxRedline has a post on four dogs recently on the Max train one of which killed another dog. 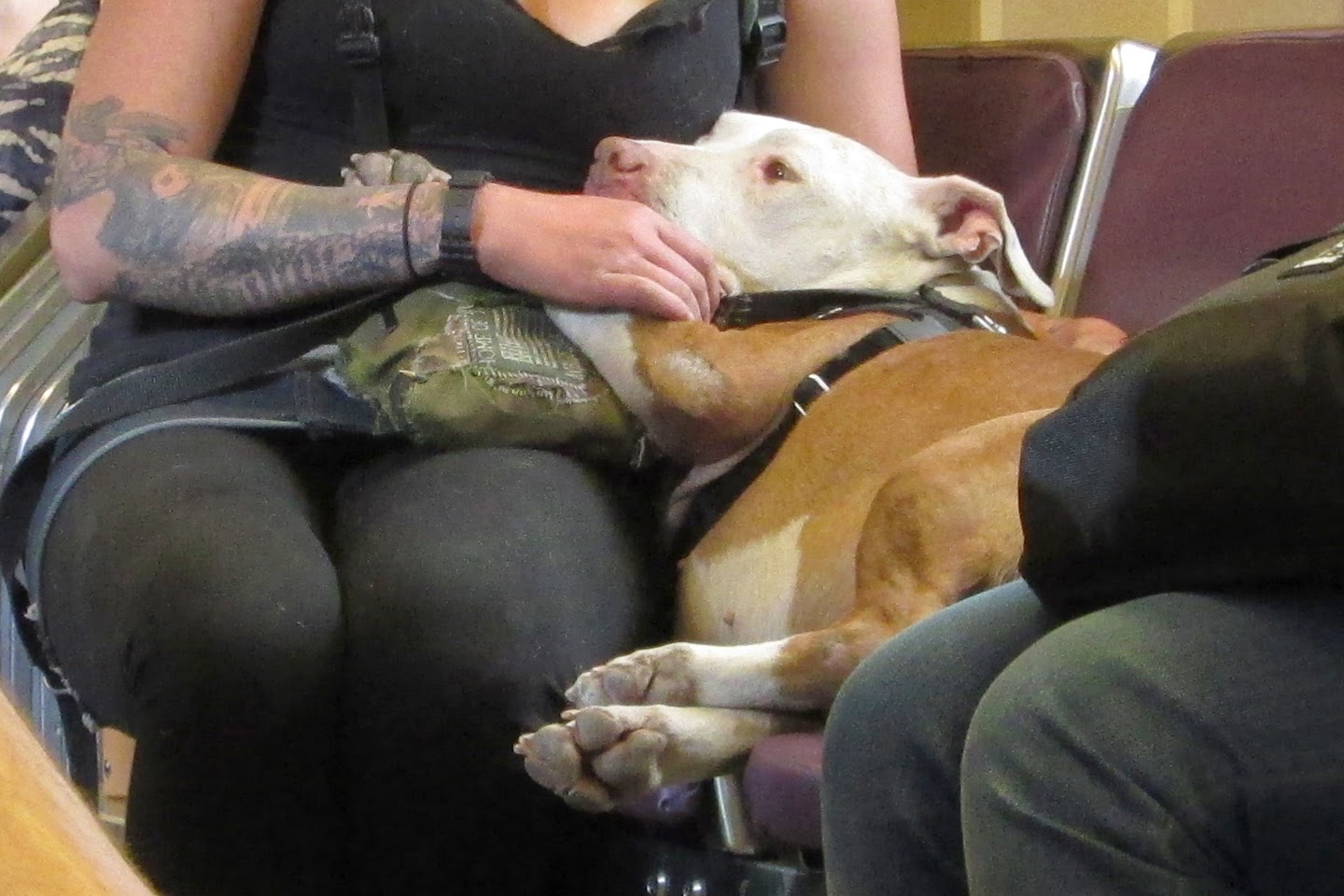 It reminded me of a trip I took on Max earlier in the summer, and there was a dog on the train taking up a seat.

On the same trip, strange but not illegal, a young man entered the train holding his pants up as he walked. Of course, low slung pants are the style nowadays, but the young man had chosen blue shorts with stars, and so it kind of stood out. And he was wearing his pants slung so low there was no way to keep them up except hold them if he walked any distance at all. What kids endure to be stylish.

Finally, there is the downtown church that wants everyone to feel comfortable using their restrooms. However, I didn't see any street people using the restrooms or other very nice meeting room facilities. So, maybe the restrooms are only for certain people who identify. You can't make these things up.

Recent Pew Research polling shows that blacks have conservative beliefs about the important values that children should be taught.

This big divide in liberal and black values is why gay marriage failed in California at the ballot (though not in the courts). It also shows the possibility for conservative inroads into the black vote if the issues can be framed in terms of values rather than by political party.

(Strange that the Pew Poll only included white evangelicals and white mainline Protestants in their polling breakout on religious affiliation and child rearing values, but no black Protestants.) 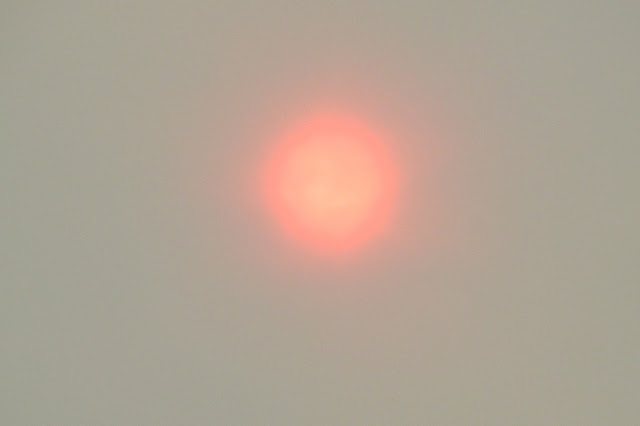 I was out and about Monday afternoon, and about 4:30 pm caught this view of the sun in the Portland sky. It looked very dying sun sci-fi.

I wasn't sure what could be the cause, but Max gave a hint that it might be due to smoke from Oregon wildfires.
Posted by T. D. at 3:01 PM 4 comments:

It's the time of year to collect seeds for next year's planting. Two of the seeds we are collecting are for lavatera "silver cup" and canterbury bells.

The difference in the seeds is interesting. The canterbury bell seeds are extremely tiny and look round until you get them under a macro lens and see that they are oblong.

By contrast, the lavatera seeds have shell-like sculpting and are maybe a hundred times bigger than the canterbury bell seed. Why? Who knows why a plant that grows maybe half again as tall as the other would have a seed many times bigger. It's a wonder of God's creation. Figuring out the seed configuration was perhaps just one small detail of why He called it work--very good work.

Canterbury bells usually reseed just fine. Hundreds of these little seeds come out of the dried, brown seed cups on the top. But, we put down a good layer of barkdust this year to cut back on the weeds. And barkdust is not great for either weeds or reseeding. So, we are gathering the seeds to hand start the plants next year.

The lavatera is supposed to reseed and puts out a good quantity of seed as each flower leaves a seed pod (they are green and turn to black when dried--both can be seen in the photo) with 15 or so seeds in each one. But, they rarely seem to survive the winter, and now they too are surrounded by barkdust. So, for sure they won't reseed for next year.

We're having fun planning for next year's planting and the macro lens has given a little extra interest in the seeds themselves.

Somebody Is Raising Turkeys in the Suburbs 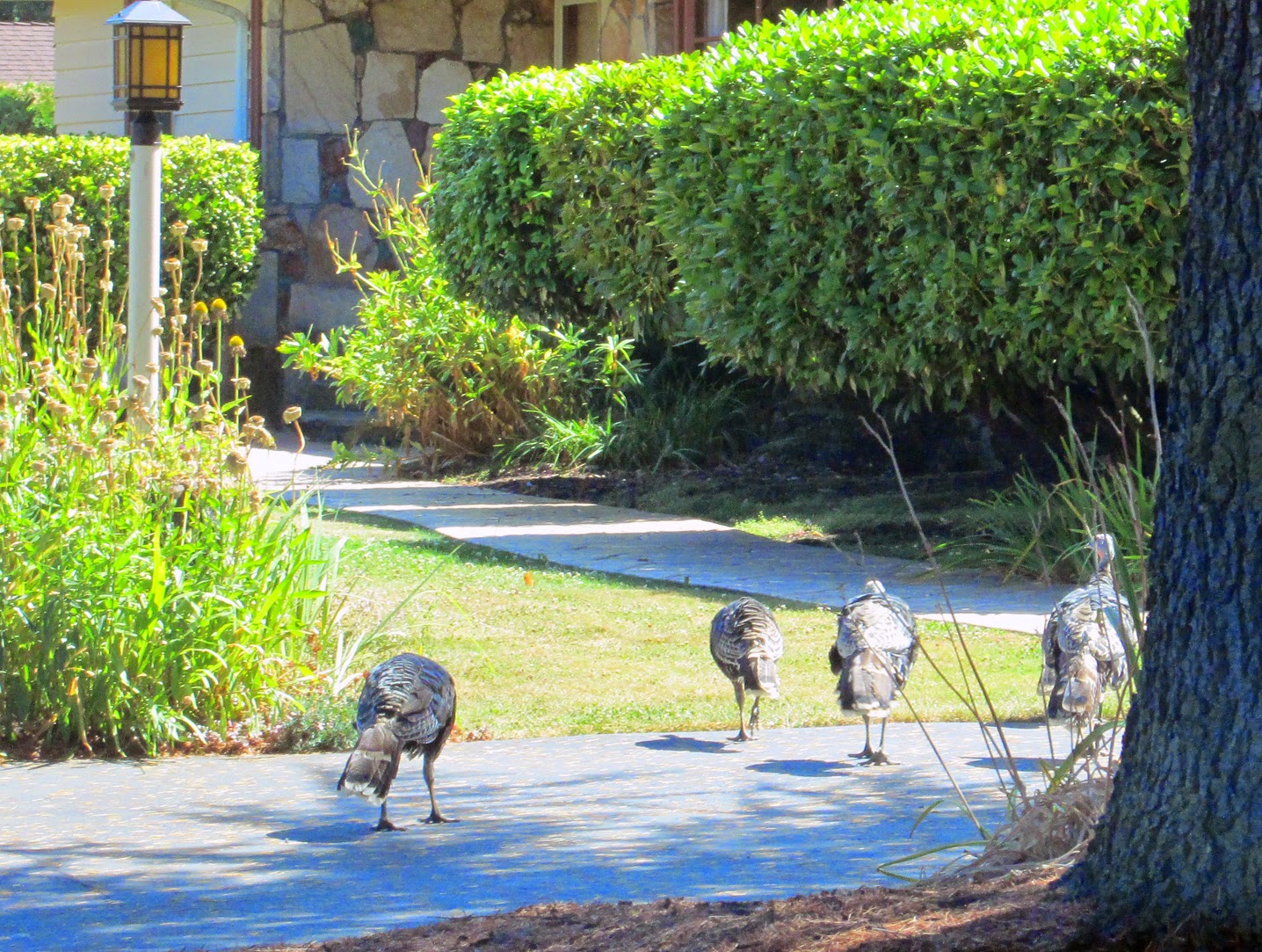 I got this photo about a minute too late. Five turkeys came walking single file across a medium-traveled Portland road (with a flashing red light at two intersections) stopping my car going eastbound and another car going westbound. By the time I had grabbed my camera from the glove box and pulled on to the shoulder, they were in a yard happily heading toward munchies, and one was already behind the tree. I figure they knew their way home.

It's the first time I've seen a live turkey in Portland ever. But what a fun sight--especially single file. I guess people usually look funny walking single file too. I think of Buster Keaton in Sherlock Jr. closely following his rival. (about the 14 minute point here)
Posted by T. D. at 6:01 PM 2 comments: