Pew Research Center gives insight on where Americans stand on religious liberty and on which major institutions are helpful or hurt the nation.

All religious liberty issues are under water, but small businesses and little girls with men in the public bathroom with them come closest to getting approval. 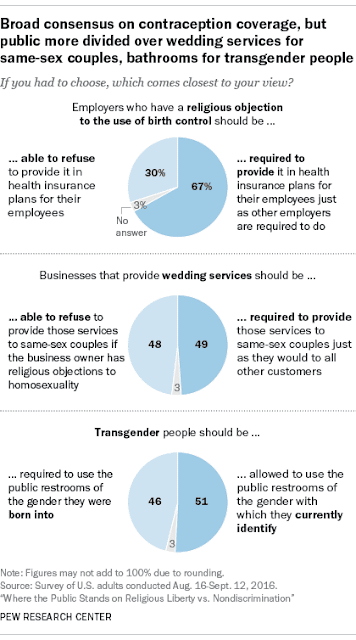 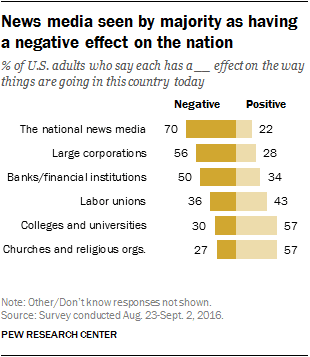 Pew Research Center has done some interesting polling on what liberals and conservatives like and dislike about the media.

The right sees the media's best point as reporting the news; the left as "providing a service to the public" ("such as informing people or acting as a watchdog").

The left is fairly evenly divided on what's wrong with the news media: biased, poor news choices or lying. The right is pretty sure the main problem is the news media is biased. I'm guessing biased is a step more moral/competent than lying or misleading. 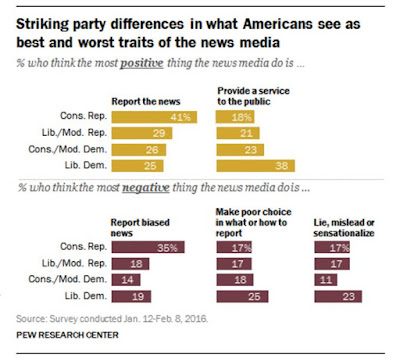 It wasn't the fact of Ted Cruz's endorsement of Trump.

There are such things as political realities. And most of the Republican candidates said on the debate stage at one time or another that any of the other candidates on the stage would be superior to Hillary Clinton.

It was how it was done and is being explained.

He should have done it in Cleveland if he was going to do it. The wait won him no new friends and created lots of enemies.

Saying he, his wife and his father have forgiven Trump sounds very Ben Carsonish. Very nice of them, but it doesn't change Donald Trump's character. For the good of the country we shouldn't allow a presidential candidate (or a president) to slander whoever stands in his/her way. What's to stop such a president from putting innocent people in jail or seizing their property just because they block some desired action. Actually, sounds like what the BLM, EPA and Asset Forfeiture Program are currently doing.

Then there's how Cruz explained his tipping point.


And as you know, the developments last week were a major reason why I made the decision to vote for Trump in November, because on Friday, he put out a list of 21 judges, and a couple of important things. One, as you noted, he put my friend and colleague, Mike Lee, at the top of the list. Senator Mike Lee, I think, would make an extraordinary Supreme Court justice to replace Antonin Scalia. But secondly, and this was the most important part of the list, and much of the media missed this, when he put it out, he explicitly committed that the only people he would consider are the 21 names on the list. Previously, they had put out a list of 11 names, but there had been no commitment other than these are among the people we will look at. On Friday, they locked themselves in and said these 21 are the only ones up for consideration. That was a major new development, and it was a major new development exactly along the lines of what I had urged in Cleveland, which is that I wanted to see our nominee defend freedom, defend the Constitution, and the Supreme Court is going to be right at the crossroads of determining whether the Bill of Rights remains vibrant in protecting our liberties, or whether it is rendered a dead letter by a Hillary Clinton judicial activist Court.

"[Trump] explicitly committed that the only people he would consider are the 21 names on the list.... On Friday, they locked themselves in and said these 21 are the only ones up for consideration." !?!?!?

Less than five months ago Cruz said Trump is a pathological liar. But, now Trump's word is his bond? Maybe Iran's word is now worth something too.

I have a lot of respect for Ted Cruz's courage in standing up to the Republican political establishment and calling them out for their duplicity. But, it seems his judgment is not as towering as his courage.

Two Republicans who have done the anti-Hillary stand better are:

- Carly Fiorina (who is just flat out a great, hard hitting speaker).

Both are very anti-Hillary without telling lies or fawning over a terribly flawed Republican presidential candidate.
Posted by T. D. at 10:23 PM 4 comments:

We've been doing some genealogical research using dna tests recently. It has helped us find the family from which one of my great-great grandfathers came from. We still don't know the actual person who was his father, but we know his father's ancestors.

It's fascinating that the imprint of father to son continues on so clearly in the y chromosome so that test is pretty determinative.

One site, familytreedna gives you a visual presentation of how your chromosomes match up to other relatives. Below are three visualizations of the chromosome match between 1) both parents and a child, 2) both grandparents and a grandchild, and 3) a second cousin.

It's okay for a former businessman to lie, change his political position on a whim, say offensive things about people because . . . he's new to politics.

As though a businessman naturally has lower moral and civil standards than professional politicians who scrape the barrel on both.

One would have thought normal people, including businessmen, had higher standards than politicians. But no, apparently they have lower standards and are to be given a pass for having lower standards.

It's okay for a total political being to lie, change her political position on a whim, say offensive things about people because . . . she isn't the former businessman who donated big bucks to her political campaigns and charitable foundation.

As though backing people and being "friends" with them is something you turn on and off from one day to the next depending on what your goal is any given day.

No wonder the country is in such a mess if average people treat their friends (and customers) like that and teach their kids to do the same. Though, to be truthful, the business people I do business with are far better people than the presidential candidates of the two major parties.
Posted by T. D. at 10:47 PM 6 comments:

Evangelicals Choosing Between Baal and Asherah

A few evangelical leaders believe that choosing the lesser of two evils still means choosing evil. People like Drs. Russell Moore, Albert Mohler and Max Lucado still plunk for biblical values. My take is it's like trying to choose between worshiping Baal or Asherah instead of saying both are wrong. But, many evangelical leaders are weighing the negatives of Hillary and Trump and deciding based on whose scale goes a little less low than the other's.

Then there's the pie-in-the-sky hope that Trump recently became a Christian though he has said nothing about it publicly nor shown any understanding of how repentance and forgiveness play into Christianity. Which, of course, isn't Trump's problem. It's the problem of evangelical leaders who support him and supposedly do know about the importance of repentance, forgiveness and publicly standing for Jesus. But those leaders shy away from speaking of the questionable Christian orthodoxy of a man like Donald Trump because it is politically difficult.

As Steve Deace notes in the interview below, Trump is losing or tied in states where key evangelical ministries are headquartered. It's a crisis for evangelical leaders. Their political clout is tied to their fidelity to the Christian faith. But, like King Saul in I Samuel 13, these leaders think they must ignore "social issues" in 2016 because the nation's fate is in the balance*. That's why abortion and selling fetal parts is not a big point for them. It's not a matter for possible prosecution, but at most merely for cutting off public money. It's also why Dr. Robert Jeffress chimes in with Trump that Planned Parenthood, which kills about 300,000 babies each year, does a lot of wonderful things.** That's a position, pre-Trump, that no evangelical would have avowed. But, because Trump said it, these evangelical leaders have to back it and say that 300,000 abortions yearly and brutal killing methods to allow selling of fetal parts don't fundamentally taint the organization.

Conservatism has the same problem. A host of "conservative" commentators and politicians tout Trump as a conservative despite his call for more spending and increased national debt, the individual mandate requiring everyone to purchase medical insurance, Trump's lack of understanding of constitutional checks and balances, and his admiration for the strong man approach to governing. William F. Buckley, Jr., saw the problem sixteen years ago.*** But too many "conservative" commentators have no idea about the essence of modern American conservatism.

As Josh Painter tweets: "Not just "evangelical" but also "conservative" has no meaning thanks to @realDonaldTrump."


______
*"Liberty University President Jerry Falwell Jr. offered a controversial endorsement of Trump in late January. 'All the social issues—traditional family values, abortion—are moot if ISIS blows up some of our cities or if the borders aren’t fortified,' he told The New York Times. 'Rank-and-file evangelicals are smarter than many of the leaders. They are trying to save the country and maybe vote on social issues next time.'"

***"What about the aspirant who has a private vision to offer to the public and has the means, personal or contrived, to finance a campaign? In some cases, the vision isn’t merely a program to be adopted. It is a program that includes the visionary’s serving as President. Look for the narcissist. The most obvious target in today’s lineup is, of course, Donald Trump. When he looks at a glass, he is mesmerized by its reflection. If Donald Trump were shaped a little differently, he would compete for Miss America. But whatever the depths of self-enchantment, the demagogue has to say something. So what does Trump say? That he is a successful businessman and that that is what America needs in the Oval Office. There is some plausibility in this, though not much. The greatest deeds of American Presidents — midwifing the new republic; freeing the slaves; harnessing the energies and vision needed to win the Cold War — had little to do with a bottom line."