Update: Got a picture of a young rider today--no helmet. 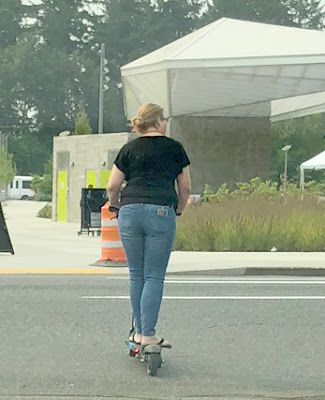 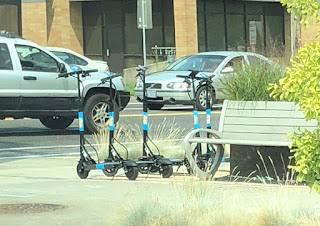 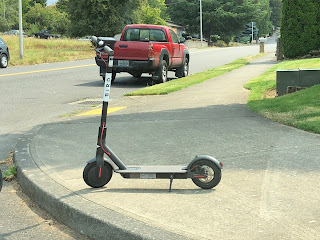 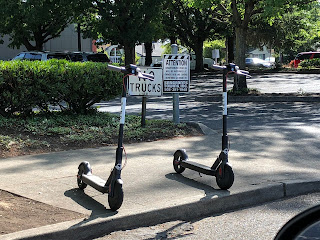 Been seeing these a lot of places around. I've only seen three people riding them--all in their late teens or early twenties. I don't think any of them had a helmet on. Seems cool for that age group, though not for older people. And not useful for shopping or people with kids.

An Oregonian review answers some major questions like speed (15 mph), balance and safety issues (not the best).

Signs of the Homeless Problem 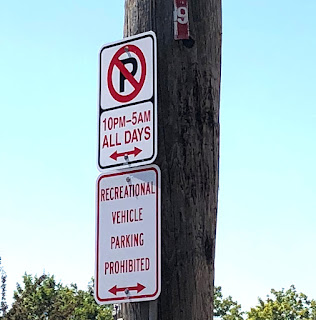 These signs just went up near a small shopping mall in Portland. Might as well be done with it and say, "No homeless people sleeping in their cars or recreational vehicles allowed."

I'm not sure how much good this will do. Just shove them into the neighborhoods near there where it would be hard to put up the no parking 10 pm to 5 am signs because home owners and renters use street parking for their vehicles. Though most people with recreational vehicles park them on their own property.

Not an easy solution for this.

I'm kind of in the middle. A young friend of mine sleeps in his car and has for about five years. He doesn't do drugs and is clean and neat. Just isn't in to having to work full time to pay rent. Actually, he does outdoor preaching and wants to be free to do that. He supports himself by a private business of doing fencing, digging, sprinkler fixing and other such jobs, and could easily go full time but wants to spend his time in ministry. So he just does what he needs to pay gas, food, clothing, car insurance, cell phone and those kinds of things.

Other neighbors I know have encountered homeless people going through their trash and recycle bins and leaving a mess--not to mention drug needles and paraphernalia left near homeless camps.

It's not an easy problem, and these signs are another one of the City of Portland's clueless responses.
Posted by T. D. at 12:03 AM No comments:

Problem Somewhat Solved: How to Get My Dog to Take His Pills 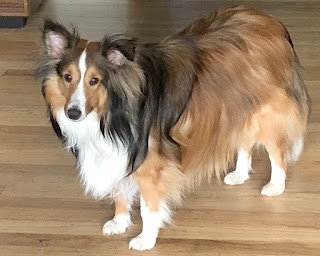 This is one year old Buddy. He doesn't like taking pills.

He recently hurt one of his front paw pads. I took him to our great vet, who gave him some pain medication. Half a pill a day for two weeks and keep him off rough surfaces. The vet said he should like the pill if he takes Sentinel. I laughed.

Buddy takes Sentinel only by force. He hates pills--including "flavored" pills. For awhile I disguised his pills in mashed potatoes, which Buddy loves. He saw through that. Then I tried wrapping them in cheese, which he loves. No more of that.

What has worked is putting some peanut butter on the pill. He still won't eat it, but when I put it down his throat, it sticks there until he swallows it. No more spitting the pill out in flaky pieces when I don't quite get it in far enough because his teeth are sharp on my fingers as he is twisting and retreating.  He even came over and licked my fingers afterward. So, he did like the peanut butter.

As my brother says, quoting from a funny Captain Kirk line, "Another triumph for science!"
Posted by T. D. at 11:31 PM 4 comments: