The Oregonian published it's Statement of Ownership information this month. This is required of newspapers and magazines using the U.S. Post Office to deliver copies of their publication. 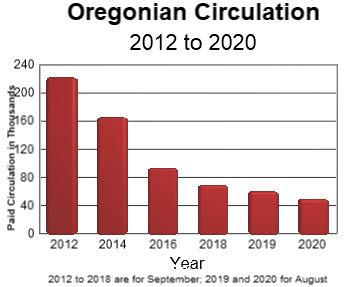 Unfortunately, the steep fall in paid circulation follows upon an even worse slump in good reporting and editing. (See my last post on a poorly written article published earlier this month on Governor Brown's plan to spend $55 million in federal aid to help Oregon businesses suffering from COVID-19-related losses.)

I thought, "Wow! Governor Brown is finally giving state money to help businesses hurt by her policies." NOT!

The money is federal aid given to the state to administer. It's not state money. It took the Oregonian until the 7th of 9 paragraphs to note that Governor Brown was giving federal money not state money.

"The $55 million relief funds come from federal CARES Act funds Congress approved in March. The governor’s office said Tuesday she set some of Oregon’s share aside anticipating additional business support might be needed later in the pandemic."

If the money was approved in March and distributed in April, why did the Governor wait until mid-November to distribute the federal relief money? The City of Portland made its plans for distribution of CARES Act funds in July. Except for Portland, Multnomah and Washington counties, CARES aid to the other cities and counties in the state had to go through the Governor.

As to why it finally comes in November, there is a partial answer. Governor Brown can't wait much longer to spend the money as it "must be allocated by the end of the year unless Congress grants an extension to the states." So, the clock ticking since March is close to running down.

It's a poorly done story from the beginning. Governor Brown isn't giving state aid, she's administering federal funds. It's as though the reporter, Mike Rogoway, knows nothing about the CARES aid and what better administered jurisdictions in Oregon have done much earlier than the Governor with their funds.

This is why paid circulation of the Oregonian keeps dropping. This isn't just an inept reporter. This is an issue those in charge of editing the newspaper should know about and did not show due diligence in overseeing the work of the reporter and how the story was presented. The earlier stories by Everton Bailey Jr. cited above were informative. This story reads like a regurgitation of a press release puff piece put out by Governor Brown's office. The Oregonian's quality of reporting and editing is, to say it kindly, uneven. (See my next post for the latest bad news for the Oregonian on paid circulation decline.)

Musings About the Election

I basically dropped out of following politics the last four years. It has been the most peaceful four years of my adult life. Heh.

But, some things filter through. I've been musing over the bits and pieces I've heard.

1. Personality/Character. Donald Trump lost (if he has lost) because of his character. I know people who normally vote Republican who actually voted for Biden just because Biden is "nicer" and they were sick of the name calling and rudeness of Trump. Unfortunately, Trump's political friends (I'm thinking here especially of some evangelical leaders), didn't help Donald Trump as long ago the prophet Daniel tried to help Nebuchadnezzar turn from his arrogance. (Daniel 4:27)

I didn't vote for Trump last time, but did this time. I was able to do it because I didn't listen to very much of what he said and almost nothing of what the media said over the past four years.  So I did not gag like some of my friends at the thought of four more years of President Trump. I did notice the confirmation of three supreme court justices who seem to want to interpret the constitution rather than mold it to follow their own views. On the other hand as nice as Joe Biden may or may not be, he is for easy abortion--easy killing of babies. That makes me truly gag.

2. Bizarre infighting. I am astounded at how crazy the infighting is among conservatives on Trump. I also gave up Twitter for four years. Ah, what relief that was! I took a few peeks this election season and got out of there as fast as I could. The comments were mostly bizarre to someone who had not been immersed in the political back and forth. Some people seem to only live for Trump's defeat others only for his re-election. Life, even political life, is bigger than that.

3. Fighting in court about the election. What a tight election. We thought 2000 was hard. People who were so glad George Bush fought the methods of counting votes in Florida are bewailing how Trump's very similar fight will bring the republic down! I, on the other hand, think if we keep on going like we are where at least 40% of Americans think their votes are not fairly counted, the country is headed for a dictatorship or anarchy. If you don't believe you have a fair chance to make political changes, why stick with the current system? In that poll only 9% of Republicans felt that votes were not fairly counted. Today lots more Republicans than that feel the vote counting system is unfair. Add those in, and even subtracting the Democrats who are now somewhat happy, I bet the leap is up to over 50% of Americans who don't trust the election system.

I'm for both sides fighting in the courts, with evidence, for fair elections. The courts may not give them, but at least there's some chance of bringing the facts out about how votes actually are counted or how additions are made to or subtractions taken from legal votes. I like to see a light shined on shenanigans. That almost never happens in either the executive or legislative branches of government.

4. Corrupt media. The same people who four years ago were touting people who wanted to give Obama's supreme court pick (Merrick Garland) a vote were calling only the Republican side hypocritical for supporting Trump's right to make a pick. Not a word about the hypocrisy of the media and Democrats who made the same 180 degree swing. Twice I heard a local TV news anchor intone that Republicans had changed their position without a word about Democrats having changed their position too. If you didn't remember the story, you would be led to believe the inferred lie that only Republicans had changed their position. If you depend on the media for information and insight, you of all people are to be most pitied. Your view of reality is badly skewed.*

5. Bottom line. The next President will have huge problems to tackle including an escalating national debt that neither major party now cares about. Bread and circuses. A country of voters who believe a lying media and have no self-discipline to do what is right or please the God of compassion and truth. That's what will bring the country down not a court battle over this election or even the election of either a bumbling leader or a bad-mannered one.

*Another instance of media lying by omitting or downplaying facts is the Oregonian inferring COVID-19 is the main cause of the wreck of downtown Portland rather than the daily violent protests and chaos in the streets.