Was fooling around today with my new solar filter. Originally bought for my telescope but I can also hang it on my superzoom camera. It's just a flexible filter material like on the solar eclipse glasses but mounted in a round cardboard holder. Cost $20.

I went online and found a photo from the Royal Observatory of Belgium today which had the same little sunspot that showed up in my photo (on the right). Not bad. I'm hoping some day to catch a solar flare. 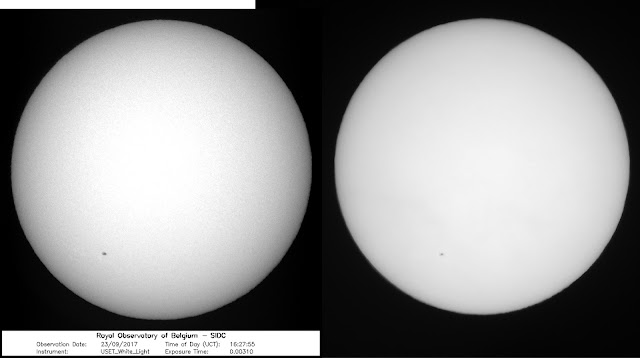 The Oregon Supreme Court has unanimously ruled that the Portland Arts Tax is legal.

The justices considered that the exclusion of taxing those making under $1,000, low income families, and Social Security, federal pension benefits and PERS income means that income is taken into account.

First, the arts tax does not apply to individuals earning income of less than $1,000 per year.

Second, certain types of income do not count in determining an individual’s income for the purpose of in defining who is and who is not subject to the tax. For example, Social Security benefits, federal pension benefits, and state Public Employee Retirement System benefits are not counted.

Plaintiff insists that, notwithstanding the income-based exclusions, the city’s arts tax does not really take income, property, or other resources into account in setting the tax. In plaintiff’s view, to avoid being classified as a poll or head tax, a tax must take income into account in assessing the amount of the tax itself, not just in defining exclusions from the tax. According to plaintiff, an exclusion provides for a tax of zero dollars, which is not an amount of tax at all; it simply does not count in determining whether the arts tax is a prohibited “poll or head tax.” Plaintiff agrees that, if the city had adopted a two-tiered tax that required persons below a set income to pay one penny and all others $35, such a tax would not be a prohibited “poll or head tax” within the meaning of Article IX, section 1a, because a penny is an amount of tax. The city’s arts tax, he argues, is different, because its two-tiered scheme requires persons below the income threshold to pay nothing. As plaintiff puts it, “0 is zero - nothing. $35 is the only amount of the Arts Tax.”

The premise of that argument is that a tax of zero is not an “amount” of tax. It is a flawed premise for at least two reasons. First, it is contrary to the historical evidence that we have cited above—evidence that suggests that, at least by the early twentieth century, considering income, property, or other resources in establishing exemptions made a tax something other than a poll or head tax.

Second, and aside from that, plaintiff’s assumption that zero is not an amount is plainly contrary to ordinary usage. It is fairly common, for example, to refer to a determination that the amount of damages in a given case is zero. (pp.883-884)

In this opinion the Court has gutted the idea of fair taxation based on a person's ability to pay. The justices have found it right to tax a person making less than $100/month the same amount as millionaires and billionaires.

And nobody is holding the City accountable for following regulations in how the money is spent.


City officials have also overspent on collections, the report found. They exceeded a voter-mandated 5 percent cap on administrative expenses, diverting almost $1 million more from arts grants than they should have from 2012 to 2015, the report said.

Well, Portland deserves what it gets.  Especially those who regularly vote for "the rich" to pay more taxes and now have mandated that they themselves have to pay the same tax as multi-millionaires.

I don't know what was happening here, but it was an interesting scene of the fire truck overwhelming the gas station with the ambulance sitting quietly at the side.