(a) RFRA applies to regulations that govern the activities of closely held for-profit corporations like Conestoga, Hobby Lobby, and Mardel. Pp. 16-31.

The Department of Health and Human Resources (HHS) mandate requiring all for-profit employers to provide twenty free contraceptive types (including four which stop an already fertilized egg from developing) restricts the free exercise of religion. Hobby Lobby, Conestoga and Mardel were willing to pay for sixteen of the twenty which did not kill already fertilized eggs.

Even though the Court assumed the Government's argument that providing free contraceptives was of compelling state interest, the Court ruled that the Government had not used the "least restrictive means" to reach that goal.


(c) The Court assumes that the interest in guaranteeing cost-free access to the four challenged contraceptive methods is a compelling governmental interest, but the Government has failed to show that the contraceptive mandate is the least restrictive means of further that interest.  Pp. 38-49.


(c) (2) The Government has failed to satisfy RFRA’s least-restrictive-means standard. HHS has not shown that it lacks other means of achieving its desired goal without imposing a substantial burden on the exercise of religion. The Government could, e.g., assume the cost of providing the four contraceptives to women unable to obtain coverage due to their employers’ religious objections. Or it could extend the accommodation that HHS has already established for religious nonprofit organizations to no-profit employers with religious objections to the contraceptive mandate. That accommodation does not impinge on the plaintiffs’ religious beliefs that providing insurance coverage for the contraceptives at issue here violates their religion and it sill serves HHS’s states interests. Pp. 40-45

Public Confidence in Military High at 74%; In News Media at Only 22%

A Gallup Poll report released this month shows public confidence in the military (74%) and small business (62%) is high. But less than 1/4th of Americans have confidence in the news media. In fact, only Congress (7%) rates worse than television news (18%) and internet news (19%). And newspapers (22%) only rate above those three and big business (21%). 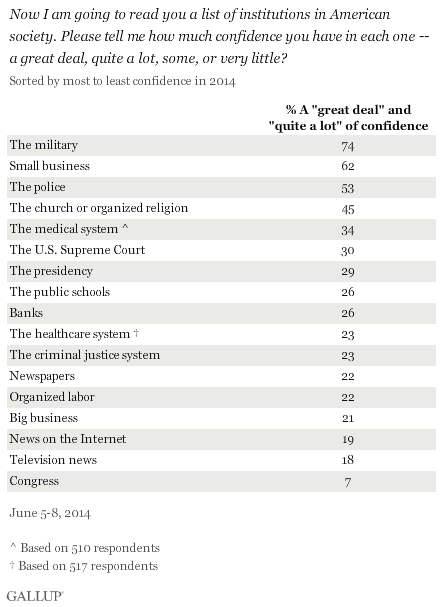 Gallup has been polling on public confidence in various institutions since 1973 and television news since 1993.  Here are some of the differences between 1993 and now:

A study on Oregon's medicaid expansion showed an increase in emergency room use in 2008-2009 when patients got insurance coverage. Under Obamacare that is now being duplicated in other parts of the US.  USATODAY:


Norton Hospital [Louisville, Ky.] has seen its packed emergency room become even more crowded, with about 100 more patients a month.

That 12 percent spike in the number of patients — many of whom aren't actually facing true emergencies — is spurring the Louisville hospital to convert a waiting room into more exam rooms.

"We're seeing patients who probably should be seen at our (immediate-care centers)," said Lewis Perkins, the hospital's vice president of patient care and chief nursing officer. "And we're seeing this across the system."

Obamacare was supposed to cut down on emergency room use because those previously without health coverage would now be able to go to a primary care doctor with their new medical coverage. But, the reverse is happening.

Some say it is because there are too few primary care doctors for the new Medicaid case load. Certainly the healthcare system clientele has expanded under Obamacare.

However, the real problem is that Medicaid, which has seen an 8.2% expansion (4.8 million through March 31, 2014*), underpays considerably the actual cost of care given. So, doctors either don't take Medicaid patients or limit the number they do take. Doctors and their staffs don't like working for less than minimum wage or actually paying to care for patients.

The PeaceHealth St. Joseph Medical Center network in Vancouver, Washington, alone took a $35.9 million loss in 2012 from cost of Medicaid care given vs. Medicaid reimbursement. So, they are paying to care for Medicaid patients. Multiply that by the more than 5,000 hospitals in the U.S., and it becomes big, big money loss and heads the U.S. healthcare system directly towards disaster. That is on top of the obvious crisis in actual medical care of not being able to give quick, complete emergency care to those who really need it in clogged ER waiting rooms.

"Look who fired the 1st shot in the real "war on women". Hint: it wasn't the GOP. See this excerpt from Hillary's book": 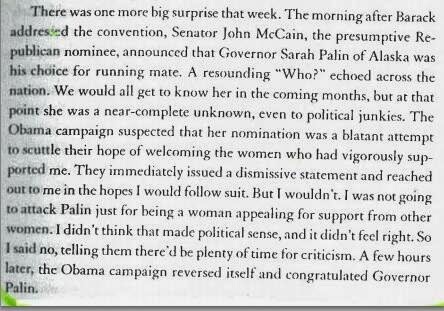