Today would have been William F. Buckley, Jr.'s 89th birthday. He was a great man--not only because of his brilliance in political debate, thinking and writing, but because he was genuinely a kind, loving man. I was blessed to have his friendship for almost 40 years. He was unfailingly encouraging, generous and kind. Thank you, Lord, for giving us Bill Buckley.


"So during those moments when doubt will assail you, moments that will come as surely as the temptations of the flesh, I hope you will pause. I know, I know, at the most hectic moments of one's life it isn't easy--indeed, the argument can be made that neither is is seemly--to withdraw from the front line in order to consider the general situation philosophically. But what I hope you will consider, during these moments of doubt, is the essential professional point: Without organized force, and the threat of the use of it under certain circumstances, there is no freedom, anywhere. Without freedom, there is no true humanity."
(from "John Kerry's America" a commencement address at the United States Military Academy, West Point, N. Y., June 8, 1971 in Let Us Talk of Many Things) 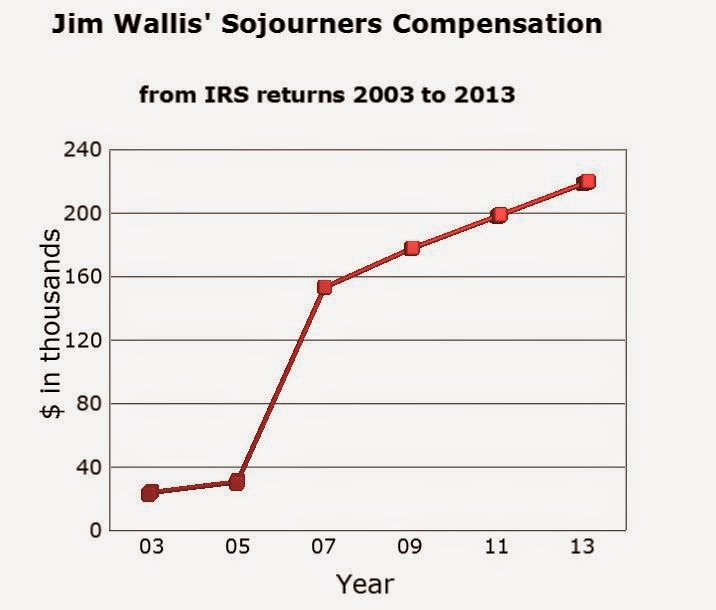 Sojourners and Jim Wallis keep sticking it to their contributors and winking at their social justice principles.

The mission of Sojourners, Inc. according to their income tax filing is "to articulate the biblical call to social justice, inspiring hope and building movement to transform individuals, communities, the church and the world."

They certainly have transformed one individual--their director. Jim Wallis' compensation has skyrocketed from $25,000 per year in 2003 to $218,000 in 2013. His compensation for 35 hours per week of work is now equivalent to almost $120/hr. Now that's hope! By contrast, the average American's hourly wage is about $25/hr in October of 2014. That's about what Jim Wallis' hourly compensation was in 2003 when he worked 20+ hours a week for Sojourners. 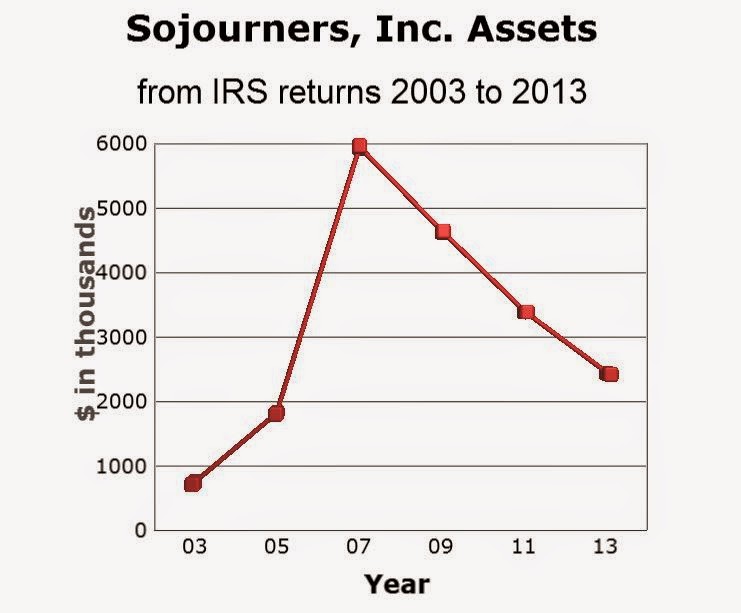 Wallis' compensation keeps rising even though the organization's assets are falling. From a high of $5.9 million in 2007 Sojourners' assets have dropped to $2.4 million in 2013. That's a drop of about 60%.

Interested in social justice? You might want to look somewhere else than at Sojourners and Jim Wallis.

Bail Security: A Penalty Rather Than Security for Appearance in Court

A friend of mine was recently jailed locally, and though poor himself was bailed out after spending about a week in jail. This led me to a process of discovering that bail security posted is not primarily to assure that the person released will show up for his court appearances. It is used as a way to fine the person who posts the bail security and gain money for the state.

In Oregon the security required is 10% of the total bail. (ORS 135.265) It is used by the state whether the defendant attends court appearances and maintains good conduct or not.

Second, they can use the bail security money for pretty much anything they want having to do with the defendant. It is regarded as the defendant's funds not the person's funds who posts the bail.

Further, it can be used to pay anything related to the defendant whether it has to do with the charges in question or not.

You can be pretty sure that they will find a use for all of it in some relationship or other to the defendant.

Here are some arguments from Robert L. Wolf setting forth the problems with the current system.

1. When the state takes security money from a third party who posts the bail, they are punishing an innocent person.

2. Taking the bail deposit of third parties whether or not the defendant shows up in court, "will have a chilling effect on suspects ability to secure and have bail posted for them." Chilling, indeed.

3. By legislation the purpose of bail is only "to secure that a suspect on release both returns to court and does not commit any misconduct while on release." It "is not intended to provide revenue to the state."


"The Owens court specifically held that the security amount must not be set so high as to "make it impossible, as a practical matter, for a prisoner to secure his release." 285 Or. at 80. The bail amount, therefore, must be a realistic amount set allowing defendants of all classes to be able to secure their release. If bail posted by third parties is subject to seizure - despite a defendant's full compliance with all the terms of a release agreement - then the courts will be discriminating against those who do not have financial ability to make bail on their own. . . . The result is that defendants are forced to stay incarcerated, not because they are poor candidates for release on bail, nor because they cannot find the money to post a security, but because they are unable to have enough to pay an entire bond to the county."

It is true that the bail security agreement requires the person giving the security to agree to give "all or part of the amount posted" to "court ordered obligations, such as payment of restitution, child or spousal support, fees, expenses, court costs or court appointed attorney fees." But, it's the only game in town. The signer has a gun to his head. Sign or the supposedly "innocent until proven guilty" person sits in jail until trial.

Of course, this is especially egregious for the poor. My friend who was bailed out would be sitting in jail until his trial date. Incidentally it is about the same amount of time he would serve if declared guilty of the charges against him. Wow, lose-lose. Serve the time whether you are guilty or not or pay a big fine. Nice choice.

I went to a local school celebration of Veterans Day. Two older vets were sitting on the right in the row in front of me both with their caps on. On standing for the presentation of the colors, one vet removed his cap. The other vet kept his on, and the first vet did a light flip of the other's cap bill to alert the second vet to remove his cap. The hint didn't take, and the second vet kept his cap on the whole time even during the Pledge of Allegiance and singing the Star Spangled Banner. It was a funny little vignette.

God bless both those guys! And my vet dad who was sitting next to me watching his granddaughter who played in the band. God bless all you vets! Thank you!

Looks like free isn't a good enough price any more to make up for second rate content. Mediabistro reports: