Senator Chuck Schumer hasn't changed his mind about major stimulus spending just because the President is now a Republican.

“We think it should be large. He’s mentioned a trillion dollars. I told him that sounded good to me,” Schumer told ABC News' Jon Karl and Rick Klein during their podcast “Powerhouse Politics.”

But Democrats will insist that the package not be, for example, all tax breaks to investors.

“We’re not going to oppose something simply because it has the name Trump on it, but we will certainly not sacrifice our principles just to get something done,” he said.

Schumer also said Democrats can find common ground with the incoming president on trade, saying he doesn’t agree with all of Trump’s proposed solutions but does agree with his “diagnosis.”

“I’m more close to that than I am to Barack Obama or George Bush’s [positions], and so are a lot of Democrats,” Schumer said. [emphasis added]

Looks like this major addition to the national debt will be bipartisan.

Missed a Bullet in Newt Gingrich Losing in 2012 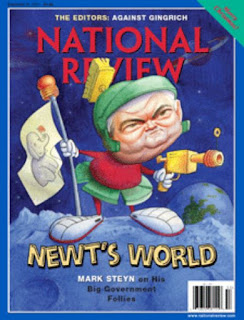 Newt Gingrich has turned out to be the Looney Tunes character* that National Review portrayed him as in 2011. The supposedly strong Constitutionalist Newt Gingrich:


Gingrich’s position is, literally, that the rules should not apply to Trump because he’s rich. pic.twitter.com/D3mA6lsv0u
— Jamison Foser (@jamisonfoser) December 20, 2016


Apparently moral and financial rules against political corruption are only for middle class and poor occupants of the White House. If you're rich enough, you can take as much money as you like.

Even worse, because a mere ripping off of money isn't as bad as actually corrupting the system, the pardoning power is to allow Executive Branch officials to do unlawful things with impunity. Hmm. That will be a fun idea when the Democrats get back in power.

Newt is the very definition of how "brilliance" is often the opposite of wisdom and integrity.

Carrier to Use Tax Credits to Automate

You knew this was coming, right? Remember Trump's defense of his business practices by saying a businessman's first duty is making money for his family and his company? Carrier believes that too. And, truth be told, you go out of business if you don't make a profit.

Part of the $7 million Trump/Pence/Indiana tax incentive deal was Carrier's promise to spend $16 million on their Indiana facility. Sounds good. Carrier is putting down major roots in Indiana. But not in terms of jobs. Most of that is going toward automation because that's the only way the company can stay in business.

"We're going to...automate to drive the cost down so that we can continue to be competitive," he said on an interview on CNBC earlier this week. "Is it as cheap as moving to Mexico with lower cost labor? No. But we will make that plant competitive just because we'll make the capital investments there. But what that ultimately means is there will be fewer jobs."

As with farming, because of automation U.S. manufacturer production is booming even though jobs have declined. Production is up 150% in the last 40 years.


All together, U.S. factories are actually producing more products today than they did in the post-World War II era, according to the Federal Reserve's reading on manufacturing output. Output at U.S. factories is up 150% in last 40 years. But U.S. manufacturing jobs have plunged by more than 30% in that same period. And automation is a big reason why.

That also means both food and manufactured products are a lot cheaper than they would be if production required lots of human labor. So, it's a big win for the U.S. standard of living.

This post is dedicated to my friend MaxRedline who has long warned about the law of unintended consequences in most feel good labor schemes.

One of the most undemocratic parts of our government is the power of government agencies to make rules which have the force of law immediately. Rep. Todd Young of Indiana has introduced a bill to require congressional approval of "all new major regulations" from federal agencies.


(Sec. 2) States that the purpose of this Act is to increase accountability for and transparency in the federal regulatory process by requiring Congress to approve all new major regulations.

(Sec. 3) Revises provisions relating to congressional review of agency rulemaking to require a federal agency promulgating a rule to publish information about the rule in the Federal Register and include in its report to Congress and to the Government Accountability Office (GAO) a classification of the rule as a major or non-major rule and a complete copy of the cost-benefit analysis of the rule, including an analysis of any jobs added or lost, differentiating between public and private sector jobs. Defines "major rule" as any rule that is made under the Patient Protection and Affordable Care Act or that the Office of Information and Regulatory Affairs of the Office of Management and Budget finds has resulted in or is likely to result in: (1) an annual effect on the economy of $100 million or more; (2) a major increase in costs or prices for consumers, individual industries, federal, state, or local government agencies, or geographic regions; or (3) significant adverse effects on competition, employment, investment, productivity, innovation, or the ability of U.S.-based enterprises to compete with foreign-based enterprises.

Requires a joint resolution of approval of major rules to be enacted before such rules may take effect (currently, major rules take effect unless a joint resolution disapproving them is enacted). Provides that if a joint resolution of approval is not enacted by the end of 70 session days or legislative days, as applicable, after the agency proposing the rule submits its report on such rule to Congress, the major rule shall be deemed not to be approved and shall not take effect. Permits a major rule to take effect for one 90-calendar day period without such approval if the President determines it is necessary because of an imminent threat to health or safety or other emergency, for the enforcement of criminal laws, for national security, or to implement an international trade agreement.

Senator Tom Cotton supports it and hopes President Trump will sign the bill.


Cotton said in an interview that he supports the passage of a bill that would require an up-or-down vote from Congress on major agency regulations. Currently, those regulations automatically go into effect unless Congress explicitly votes override them. “I’d like him to sign that bill,” he said of Trump.

So far all Republicans in the House (except  four who didn't vote) approved of this legislation. Only two Democrats voted for it. Now it goes to the Senate.

Will Senate Republicans and President Trump support this brake on unelected bureaucratic control of the country? This is as important as keeping originalists in the majority on the Supreme Court. It is a much easier method of controlling authoritarian legal/political activism than the case by case method of the courts.

Imagine me agreeing with liberals (36%) and Democrats (33%) more than conservatives (24%) and Republicans (23%) that the free market doesn't hurt us. Or that the President shouldn't be giving benefits to individual private companies (Dems 54%, Republicans 22%).

After making no criticisms during the last year about Trump plans to punish Carrier for moving its jobs to Mexico, Sarah Palin has finally discovered that government interference with Carrier policies via threats or bribes might be crony capitalism.

Foundational to our exceptional nation’s sacred private property rights, a business must have freedom to locate where it wishes. In a free market, if a business makes a mistake (including a marketing mistake that perhaps Carrier executives made), threatening to move elsewhere claiming efficiency’s sake, then the market’s invisible hand punishes. Thankfully, that same hand rewards, based on good business decisions.

But this time-tested truth assumes we’re operating on a level playing field.

When government steps in arbitrarily with individual subsidies, favoring one business over others, it sets inconsistent, unfair, illogical precedent. Meanwhile, the invisible hand that best orchestrates a free people’s free enterprise system gets amputated. Then, special interests creep in and manipulate markets. Republicans oppose this, remember? Instead, we support competition on a level playing field, remember? Because we know special interest crony capitalism is one big fail. (emphasis added)


However well meaning, burdensome federal government imposition is never the solution. Never. Not in our homes, not in our schools, not in churches, not in businesses.

Gotta’ have faith the Trump team knows all this. And I’ll be the first to acknowledge concerns over a deal cut by leveraging taxpayer interests to make a manufacturer stay put are unfounded – once terms are made public.

Though Palin has faith that the details of the deal will show that Carrier wasn't offered tax rewards not available to other businesses, it's obvious her faith in Trump and his team has been misplaced all this time. Let's hope she finds her way back to conservative and freedom loving principles.
Posted by T. D. at 2:48 PM 8 comments:

Not Good for Anyone: Businesses Making Decisions to Please Politicians

But more broadly, this [Trump/Carrier type deals] is all terrible for a nation's economic vitality if businesses make decisions to please politicians rather than customers and shareholders. Yet America's private sector has just been sent a strong signal that playing ball with Trump might be part of what it now means to run an American company. Imagine business after business, year after year, making decisions based partly on pleasing the Trump White House. In addition, Trump's hectoring on trade and offshoring distracts from the economic reality that automation poses the critical challenge for the American workforce going forward.


In her 1998 book, The Future and Its Enemies, Virginia Postrel saw the major dividing line in American politics as less left vs. right than the "dynamists" vs. the "stasists." The former values change and experimentation, as messy as those things can be. Dynamists live in anticipation of the future because they just know it will be a great place. The stasists often are nostalgia-ridden and willing to use top-down control to keep things as they are or try to shape them into familiar forms. Today they fight globalization, tomorrow it might be robots and artificial intelligence in order to "save jobs."