Shame on Jeff Sessions for Increasing Government Use of Asset Forfeiture

In a terrible move for justice and individual rights against government overreach, Attorney General Jeff Sessions announced the federal government will increase the use of asset forfeiture.

"'[W]e hope to issue this week a new directive on asset forfeiture—especially for drug traffickers,' Sessions said. 'With care and professionalism, we plan to develop policies to increase forfeitures. No criminal should be allowed to keep the proceeds of their crime. Adoptive forfeitures are appropriate as is sharing with our partners.'"

What Sessions is promoting and expanding is the program that allows federal law enforcement officers or their local and state police partners to seize any property or monies they think might be involved in illegal activity. The person whose funds/property have been seized has to go to court to prove innocence. And the funds or proceeds from property seized goes into the pocket of the agency doing the seizing.  So, the incentive for law enforcement to anticipate that money or property is involved in illegal activity and seize it is high.

On the other hand, Senator Mike Lee, a principled conservative, still condemns the governmental abuses the asset forfeiture program allows.

Lee was referring to conservative Supreme Court Justice Clarence Thomas' notable dissent* in an asset forfeiture case this June. Thomas wrote that forfeiture operations "frequently target the poor and other groups least able to defend their interests in forfeiture proceedings."

Unfortunately, Jeff Sessions continues to show his bankruptcy on conservative and limited government issues as he did on this issue while still a senator.
_____
*"As Thomas explained in Leonard v. Texas, 'this system—where police can seize property with limited judicial oversight and retain it for their own use—has led to egregious and well-chronicled abuses.' For one thing, 'because the law enforcement entity responsible for seizing the property often keeps it, these entities have strong incentives to pursue forfeiture.' For another, this sort of police abuse disproportionately harms disadvantaged groups. 'These forfeiture operations frequently target the poor and other groups least able to defend their interests in forfeiture proceedings,' he observed. 'Perversely, these same groups are often the most burdened by forfeiture. They are more likely to use cash than alternative forms of payment, like credit cards, which may be less susceptible to forfeiture. And they are more likely to suffer in their daily lives while they litigate for the return of a critical item of property, such as a car or a home.'" 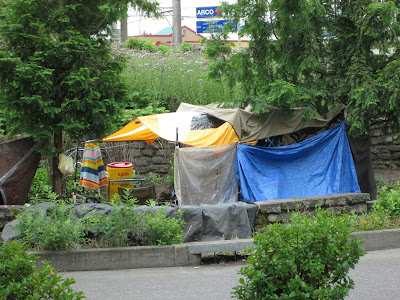 One was very neat and tidy. (photo to the right)

Another was a makeshift affair that didn't last more than a day because it was on business property that had a reasonable amount of traffic. (photos below)

I'm conflicted on this. My heart goes out to those who are mentally ill but have been "freed" by the state of Oregon to live on the streets. And to those caught in personal circumstances (even of their own disfunctional making) that have alienated them from family and friends. And then there are those caught in the web of alcoholism or drug addiction who are too often a menace to those around them. 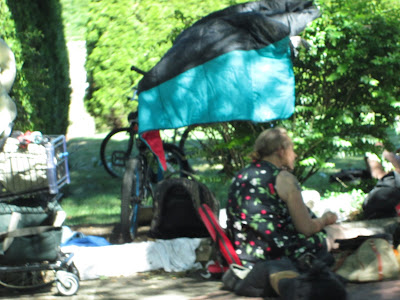 I have a younger friend in none of the above categories who has lived out of his car for three to four years now. He had a small reseller business for awhile that he had office space for and has done heavy day labor work. But, neither of them gave him the sort of income that could pay the high rent of a place to live in Portland thanks to Portland governmental policies that have vastly driven up the cost of housing. On the other hand, business space rent is low in comparison to living space. Actually, he could have lived very nicely in his business space (about $250/month). 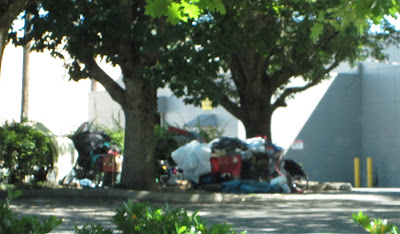 I don't know what the answer is besides the government getting out of the way of housing/shelter construction. But, I personally like and support outreaches like Portland Rescue Mission and Union Gospel Mission. I wish more churches and Christians gave to expand those sorts of ministries.

My friend keeps neat and clean through places that allow him to use their showers and has found outreaches that provide meals when he needs them. The winter time is worst. I was out driving on one of the cold nights last winter, and my car heater didn't heat up warmer than lukewarm during a 40 minute freeway drive. So, a car provides some relief, but not a lot.

So many organizations have opened their doors to shelter our neighbors during this severe weather. Thx to St. Francis Dining Hall, @ugmpdx
— Deborah Kafoury (@dkafoury) January 11, 2017