Oregonian Has Trouble Explaining Business Flight from the City Center

From a recent Oregonian article on businesses almost frantic to leave city center:

"Businesses want out of downtown Portland, as soon as possible.

"The amount of space available for sublease in downtown jumped by 36% in the spring as tenants sought to vacate offices and storefronts in the early months of the coronavirus pandemic, according to data provided by real estate firm CBRE. Other firms have also reported an increase in the number of downtown businesses looking to leave."

The lead thought is that it is due to the pandemic though protests are mentioned.

"The pandemic has led to empty office buildings and a lack of tourism, depriving downtown businesses of their regular clientele. Business owners have expressed concerns about continued downtown protests, which have given Portland a reputation for upheaval and, at times, led to vandalism and looting."

Reporter Jamie Goldberg does take issue with real estate firm vice president Trevor Kafoury's claim that it is national coverage of Portland protests, not the protests themselves, that is causing people to stay away from downtown in droves. She points out that Kassab Jewelers and Standard Insurance have had real security problems.

“'I don’t think there are ‘unique’ issues,' Kafoury said. 'Many downtowns face issues related to social unrest. However, Portland has received an inordinate amount of national media attention and a challenge we face is overcoming the perception that has been created for downtown.'”

"However, it isn’t an issue of perception for some downtown businesses.

"Kassab Jewelers was looted after a riot broke out on May 30 following a peaceful protest in the wake of George Floyd’s death at the hands of Minneapolis police officers. Kassab Jewelers' downtown location has yet to reopen and its owners are now suing the City of Portland for failing to protect downtown merchants.

"Bob Speltz, a spokesman for Portland-based insurance company The Standard, said in August that the company had relocated downtown employees to the suburbs after its office building sustained repeated damage and several employees and security contractors were assaulted near the downtown office. He said The Standard was deeply supportive of a renewed focus on racial justice, but concerned about continued 'criminal activity from opportunists not associated with the legitimate protests.'”

Still Goldberg has trouble putting two and two together. She reports that businesses are fleeing downtown Portland to places "outside downtown and in the suburbs"--which have the same COVID-19 problems as downtown Portland. So, why is business so much better outside city center? Goldberg doesn't seem interested in finding the answer.

"Industry experts aren’t seeing the same problems outside downtown and in the suburbs.

"[Jacob] Pavlik [a real estate company research manager] said some companies that were already considering moving their offices to the suburbs have been quicker to pull the trigger because of questions about the downtown market. Kafoury said he has seen numerous downtown tenants touring suburban spaces and considering a move out of downtown as well. Other tenants have stayed in downtown spaces after working with their landlords to restructure their leases."

The only major difference that has suddenly appeared on the scene is the protests and their violence which the mayor, city council and the Multnomah County district attorney seem not at all interested in curbing. In fact, another Oregonian article released on the 7th reports the Multnomah County DA Mike Schmidt has "declined" to prosecute 70% of the protest cases referred to him. That he hasn't declined to prosecute 70% of all cases referred to him by the police shows that he has been corrupted by personal agreement with or fear of the law breaking protesters so that he treats them differently from all other law breakers--which is, paradoxically, exactly what the protesters are supposed to be protesting--unequal treatment. The new slogan should be: Defund District Attorneys!

Schmidt doesn't seem to have a problem prosecuting violence outside city center and in the suburbs even for minor crimes, but downtown it's a different story. People see that difference and feel how dangerous downtown has become but don't feel similarly about doing business outside the downtown area or in the suburbs.

It's pretty clear that violence will continue in city center and business will continue its disastrous decline as long as people like Schmidt, Wheeler and the Portland City Council are elected. Caveat emptor.

Do face masks really help that much?

Does social distancing really help that much?

Does going out very little really help that much?

All of these are part of the insistent clamor about what stops COVID-19. It is a flu. Now that the flu season is upon us, we may be able to judge their effectiveness by how much or how little they do to stop flu hospitalizations and deaths compared to previous years.

My own view is that all those things only delay the moment of contact with COVID-19. I believe most everyone will eventually be exposed to it, so the main benefit of masks, social distancing and lack of travel is keeping the medical system from being overwhelmed by patients at any particular time. 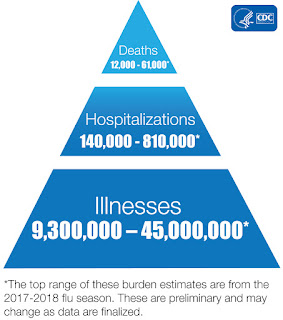 The CDC estimates average annual deaths from the flu as between 12,000 and 61,000 since 2010 in the U.S. That's a pretty wide range. But, actually determining deaths from diseases like the flu or COVID-19 is not that easy. Almost always there are contributing factors that in themselves could cause death as well. So, determining the major cause of death is a guess.

Here are the figures for each year:

Still, these are ballpark numbers that might give indications of the effectiveness of the current COVID-19 strategies.

Oregonian blames pandemic rather than violence for restaurant failure

Oregonian email headline: A Portland chef on the pandemic and downtown restaurants: 'There’s not a single soul walking by'

You can't read the story if you aren't a subscriber, but the headline seems to indicate the chef blames it all on COVID-19. Here's the first paragraph from the email:

"DOWNTOWN DINING: Before the COVID-19 pandemic, the James Beard Award-winning chef Vitaly Paley and his wife, Kimberly Paley, employed more than 200 people across their Portland restaurants, including Imperial (shown here in 2012). But as downtown Portland emptied out amid the coronavirus pandemic, Imperial brought in less than 20% of its pre-coronavirus business. It closed Saturday after an eight-year run, and other Paley restaurants downtown have dim futures."

But, the main huge factor for no one eating at downtown restaurants is the continuing violence downtown (last touted as 100 days of protest).

COVID-19 certainly has had an impact because of Governor Brown's mandates about social distancing which cuts restaurant business at least in half for indoor dining.

However, that it isn't the major reason for the 80% drop off in Chef Paley's restaurants can be seen by restaurants open and doing business in other parts of the city where there is no ongoing violence. In my area even mom and pop restaurants are open, some doing only takeout but a significant number with in restaurant dining. COVID-19 isn't keeping customers away from their restaurants, though, of course, governmental rules have made profitability extremely difficult.

Poor Chef Vitaly Paley had the bad sense to locate his restaurants in downtown Portland where government is incapable of doing the main job of government: keeping its population safe.

I feel sorry for Chef Paley and the other business owners in downtown Portland. They may have an excellent product and business model, but that doesn't mean anything when government is so incompetently run that people fear to go to near their businesses.

I have long tried to avoid doing any business downtown. Traffic patterns have long been a mess. But now you couldn't pay me to go downtown. There's not only the violence but the city can't even stop protesters from blocking off major streets--even the freeway. Who wants to risk being stuck in a giant traffic jam, let alone face possible physical violence? And when it comes time to move, you better believe I will do everything possible to locate outside Portland city limits.