On October 1, 2013, the Oregonian went to a four day a week delivery of its print newspaper. It has not worked out well for paid circulation.

That pattern has continued into 2015. The September 2015 report published Friday on page A4 of the Oregonian shows that paid daily circulation has dropped another 19% in a year to 121,573.

Here are the September Statement of Ownership reports for the Oregonian from 2012 to 2015:


If reports are true (and President Bush's spokesman did not deny that disparaging remarks were made), President George W. Bush claimed he doesn't "like" presidential candidate Ted Cruz.

Former President George W. Bush reportedly ripped into Texas Sen. Ted Cruz at a weekend gathering of donors to his brother's presidential campaign, according to a published report Monday.

Politico reported that Bush said of Cruz, "I just don't like the guy," at the event, which was held Sunday night in Denver.

According to the report, which cited at least six donors who were at the event, Bush said he did not like Cruz's de facto alliance with Republican front-runner Donald Trump, who has notably spared Cruz from the criticism he has ladled onto other members of the 15-candidate Republican field.

"He said he found it 'opportunistic' that Cruz was sucking up to Trump and just expecting all of his support to come to him in the end," one donor told Politico when asked to describe Bush's remarks about Cruz. The report added that the former president had been engaging with amiable discussions about the state of the GOP race when Cruz's name came up.

This is the same President who has not said a negative word about President Barack Obama since Obama's election in 2008 out of a sense of what's best for the presidency and the country. But, one of the top five candidates for his own party's presidential nomination is fair game for criticism on such a trivial issue (not publicly clashing with another Republican candidate) in such a petty way (I don't like him)? Sad.

How politically unusual such a negative comment was can be gauged by the reaction of one of the donors present at the meeting.


"I was like, 'Holy s---, did he just say that?'" the donor told Politico. "I remember looking around and seeing that other people were also looking around surprised."

To his credit, Ted Cruz showed real class in responding that he "will always be grateful" to President Bush.


Cruz, in a written statement put out by the campaign on Tuesday, said he would not be "reciprocating" after the comments.

"I have great respect for George W. Bush, and was proud to work on his 2000 campaign and in his administration," he said in the statement. "It's no surprise that President Bush is supporting his brother and attacking the candidates he believes pose a threat to his campaign. I have no intention of reciprocating. I met my wife Heidi working on his campaign, and so I will always be grateful to him."

Poor President Bush. He strains at a gnat* in not wanting to appear to criticize President Obama on Iran and ISIS policy just last April and swallows a camel in criticizing Cruz for being "opportunistic" in not clashing with Donald Trump.
_____
*Matthew 23:24
Posted by T. D. at 1:37 PM 4 comments:

2016 Presidential Candidates Who Attract the Most Small Donations 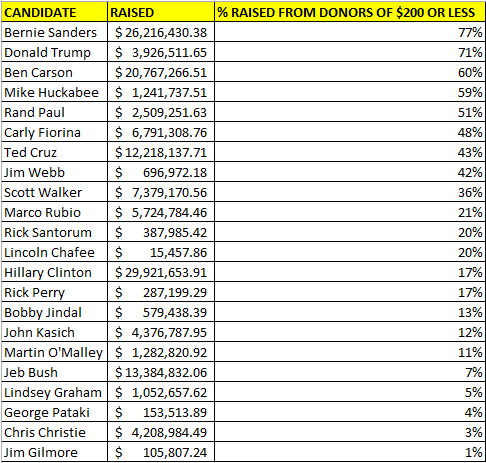 He's got other charts on who spends least in terms of money raised and who has the most cash on hand.

Ideas that Need More Thought: Support the Republican Speaker Nominee or Be "Ostracized"

Apparently some Republicans in the House think it would help Republican unity to "ostracize" all Republicans who don't vote for the majority candidate for Speaker (and other positions?). From Pete Kasperowicz:

House Republicans are considering a change to House rules that would force GOP lawmakers to either vote for the new House speaker nominee, or be "ostracized" from the Republican Party and lose all committee assignments.

Rep. Dennis Ross, R-Fla., said on C-SPAN that the idea behind this possible rule change is to force Republicans to unite around one leader, and end the squabbling that has divided the party for the last few years.

"There may also be a rule change proposed that says if you don't support the nominee of the conference on the floor of the House, that you will be ostracized, or otherwise removed from the conference, and your committee assignments may be taken away," he said.

The fear is that there will not be 218 votes to elect a Speaker.

Hmm. The Republicans now have 247 members in their caucus. They are afraid of losing 30 in the vote for Speaker. That same 30 means the difference between controlling the House or not.  If you need 30 for a majority, how smart is it to antagonize them? And push them out of your conference?

And what does it do to committee assignments? Do Republicans just give up their members on some committees so they no longer have the majority. Not smart. Or dole out the assignments of the 30 among the 217? As though the current committees are getting necessary work done.

Rep. Ross argues for open process in presenting bills in the House. But he seems not to have the same open process view as regards leadership positions. Sounds like his position needs some fine tuning to be consistent.

See the CSPAN video of the interview with Rep. Ross. About the 27:00 mark is where he talks about the possible rule changes.

How You Can Tell Real Conservatives in the Senate

On September 30th the Senate voted to continue funding the federal government at current levels through December 11th. The vote was 78 to 20 with 2 not voting.

Here are the list of Republican Senators currently running for president:

Only two senators did not vote. Interestingly they were both Republicans and both running for president: Senators Lindsey Graham and Marco Rubio. Hmm.

The other two Republican senators running for president voted against current funding levels: Senators Ted Cruz and Rand Paul. They backed up their current campaign pledges to cut the federal budget with this vote.

A lot of supposedly conservative Senators not running for president voted for the current budget to be continued. (see list below)

Of course the bill has a title that would lead you to believe it has nothing to do with the budget: H.R. 719 (TSA Office of Inspection Accountability Act of 2015), A bill to require the Transportation Security Administration to conform to existing Federal law and regulations regarding criminal investigator positions, and for other purposes. So much for Congress hiding their votes.

Here are the 20 Republican senators who voted against the bill:


Here are the 32 Republican senators who voted for current funding to be continued:

So, of 54 Republicans in the U.S. Senate, 32 voted to continue budget spending as is, 20 voted against the current budget, and 2 didn't vote.

These 32 Republican senators are the same people who in their election campaigns rail against current federal spending that grows the national debt by $1.9 billion per day. So, this vote is a nice little cheat sheet for who stands behind their campaign pledges and votes for fiscal sanity.

When I got an email or regular mail solicitation from one of these asking for my support for their "conservative" agenda, I plan to bring up this vote as my response.
Posted by T. D. at 5:12 PM No comments:

From Caitlin Owens of The National Journal:


The Sen­ate quietly passed a bill that would over­turn the Af­ford­able Care Act’s ex­pan­sion of the small-group in­sur­ance mar­ket on Thursday—and it did so with sur­pris­ingly little fan­fare.

The le­gis­la­tion, passed by voice vote, gets rid of the ACA’s re­quire­ment that states in­crease the defin­i­tion of their small-group mar­ket from em­ploy­ers with 50 or few­er em­ploy­ees to 100 or few­er by Jan. 1, 2016. The change would have sub­jec­ted many small and mid­sized busi­nesses to dif­fer­ent rules. Among those was the re­quire­ment for cer­tain es­sen­tial health be­ne­fits to be covered, which is not re­quired in the large-group mar­ket.

The House passed the bill by a voice vote on Monday.

A little common sense from Congress. Let's hope President Obama has enough sense to agree. Bets on whether this will be ignored by the press and not commented on by the President?