Susan Estrich writes an insightful article on the problems with fawning media coverage for Sen. Obama. Here's point two (of three) in her conclusion:

Second, being the favorite of the press doesn't necessarily win you votes. Most people don't actually like the press. The friend of my enemy is not necessarily my friend. Being liked by the boys and girls on the bus doesn't necessarily earn you the respect of the people back home. Standing up to them, giving as good as you get, all that helps. But if being loved by the press were a sure route to success, Hillary Clinton would never have carried all those big states after March 1. Ronald Reagan would never have gotten elected President. George Bush would have lost, twice.

It has been interesting to watch the backlash grow against blatant media bias. A big wave came with the media treatment of Sen. Clinton. A small but significant pro-media group was peeled off. I wonder how low the rating for reporters will drop in the next Harris poll on trusted professions. The last one in 2006 had the news media in 14th (TV newscasters) and 16th (Journalists) out of 22 places and 4 to 11 percentage points below the President (13th).

The lack of public concern over the financial woes that newspapers are facing or the drop in readership and viewership of the mainstream media is telling. All this is compounded by the fact that newspapers, news magazines and the evening news aren't even on the radar of the young.

The mainstream media's slow demise is turning out to be no loss--especially as seat-of-the-pants journalism and commentary blossoms in the blogosphere. That's how it was when the press began and grew in this country. People reported and commented out of love and passion rather than for professional status.
Posted by T. D. at 8:35 PM No comments: 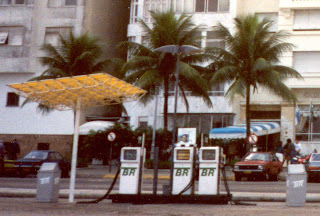 Brazil is putting economic development, including rising consumption of oil, as a priority despite having to buy oil after two years of self-sufficient production.

O Estado reports that oil producer Brazil has had to buy oil the first four months of 2008 and demand has been double the expected increase (5.8% actual increase over the 2.4% anticipated increase).

The Brazilian government doesn't seem worried. It has acted to lower Brazilian gas prices (currently about $5.90 per gallon) by reducing the per liter gas tax. The tax drop is 25%--dropping the rate from what would be equivalent to 88 cents a gallon to 65 cents a gallon. The gas tax vacation pooh-poohed here in some quarters has been taken seriously by the Brazilians (whose economic policies have seen a significant increase in value of the Real against the Dollar in the last 10 years).

Brazil has been able to meet its oil needs since 2006. The current oil deficit is a blip in Brazil's oil production plans. Brazil has massive oil reserves (including recently found huge offshore reserves that could make it an oil producer rivaling the big guns in the Middle East).

If additional drilling by Petrobras, as Petroleo Brasileiro is known, confirms the Tupi and Carioca estimates, the fields together would contain enough oil to supply every refinery on the U.S. Gulf Coast for 15 years. Petrobras said it needs at least three months to determine how much crude Carioca may hold.

Zeihan said that beyond supply gains from Brazil, it will take a tripling of Canadian oil-sands output and greater fuel efficiency to end Western reliance on Middle East oil.

The U.S. imports about 10 million barrels of oil a day, or 66 percent of its needs, according to the Energy Department in Washington. Saudi Arabia was the second-largest supplier in January, behind Canada.

Brazil's commitment to finding and using its massive oil resources puts it in the front line of the world's current and future economic powers. Its lowering of the gas tax at the pump not only eases the impact of oil price hikes on the average Brazilian but encourages business expansion.

I have found two problems with this update.

2. On Age of Empires II, Conquerors Expansion, the screen would automatically scroll to the top left. You could click on another part of the screen, but it would start scrolling to the upper left again. The game was unplayable like that. When I removed the XP update everything worked fine again.

Here's how to remove the update:

1. Go to START, CONTOL PANEL, ADD OR REMOVE PROGRAMS
2. Scroll down to Windows XP - Software Updates
3. Click on the update and select REMOVE

Since I uninstalled it, I don't know what other programs the KB951748 update negatively impacts. But, if you have a software problem that is just showing up, try removing the update.
Posted by T. D. at 12:02 PM No comments: