Abortion Leading Cause of Death for American Hispanics and Blacks 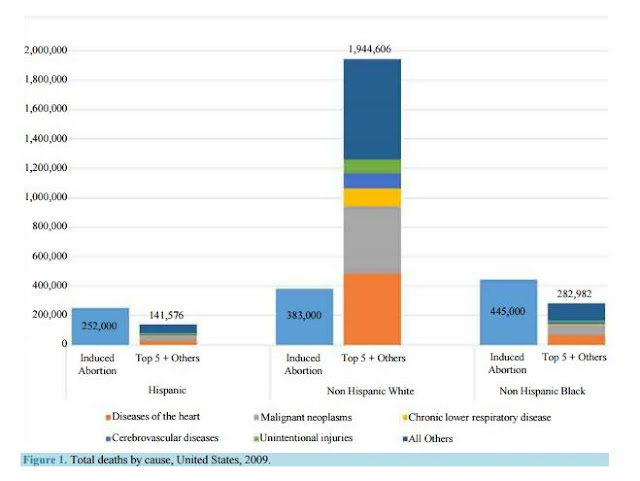 The authors of the study note that though abortion is the leading cause of death for Hispanics and Blacks there is neither "availability of consistently reported valid data" nor "allocation of sufficient resources for research" to track this information. They conclude that this is an example of science denial of the impact of abortions on deaths.


The exclusion of abortion as a cause of death, in spite of conclusive science to contrary, and the relative paucity of information and funded research on a topic of demonstrated consequence to the demographic composition of the society, may be the ultimate example of science denial. An abortion death is deemed necessary and performed by other humans in a purposeful and completely legal process. In these respects an abortion is similar to capital punishment and subject to the same clash of varying religious, political and ideological values. The appropriate role of science is to inform this societal dialogue with objective information. Labeling abortion as a preventable death is not an argument for restricting access to a legal abortion. However, refusing to acknowledge abortion as a death undermines the role of science and the value of transparency so fundamental to a free society.

_____
*Interesting that scientific measurements are done in terms of being Hispanic or not.

Cruz in his minor role looks pretty good. Trump looks bad, but his off screen voters and the supporter at the end look pretty bad too.
Posted by T. D. at 7:52 PM No comments:

Trump Being Elected Will Not Result in Conservative Supreme Court Justices

Trump being elected will not result in conservative Supreme Court justices.

Point 1: Supreme Court nominees have to be confirmed by a majority vote of the U.S. Senate. (Article II, Section 2 of the Constitution) But, under current Senate rules, Supreme Court nominations can be stopped by a filibuster supported by 41 senators.

Point 2: Republicans currently hold a majority of 54 senate seats. Democrats have 44, and there are 2 Independents who caucus with the Democrats.

Point 3: Republicans have to defend 24 senate seats; Democrats only 10. Of 10 senate seats in danger of flipping, 8 are Republican. Chances of getting to 60 to prevent a filibuster are infinitesimal.

Point 4: Trump doesn't much care if Republican senators get elected. Neither Trump nor Pence are backing John McCain of Arizona or Kelly Ayotte of New Hampshire (in their primaries), and Trump has been critical of both. Further, Trump isn't campaigning or raising funds for Republican senatorial candidates.

Point 5: Trump's persona and campaign style of personal attacks have made electing any Republican hard.

Point 6: Trump has flipped on so many issues, the odds of staying with his conservative justices promise are low.

Even if he wins the presidency and keeps that one promise, there's no way Democrats will confirm any conservative court nominee. The Democrats have shown they know how to play political hard ball both with a majority (Obamacare) and a minority (budget votes they don't approve of). And they will have the mainstream media backing them almost unopposed since Fox has damaged itself in the eyes of many conservatives and Republicans with its pro-Trump rationalizations.

The best hope is that Trump will be able to confirm "centrist" (read: liberal light) justices. Hillary will also have the same chance because Democrats will not have 60 votes to prevent a filibuster in the Senate. But, since Republicans don't vote their conscience but vote for political utility she will probably be able to get liberal moderates through.

So, your choice will be liberal light at best and probably liberal moderate. Is it worth the shame and danger of backing a vile, unstable candidate like Donald Trump?

Note: Post has been updated to reflect filibuster numbers. Two-thirds vote of Senate is only required on treaties.
Posted by T. D. at 1:16 PM 4 comments: