He was my most admired political thinker. He taught me that values are at the center of politics. That it was really conservatives and those who support the free marketplace who care about the poor and victimized.

His summations were a call to follow what is good, right and true.  He loved Whittaker Chambers and Alexandr Solznhenitsyn.

He was a devoted Christian. He was, by the grace of God, my friend.

Here's what he said in conclusion at a debate in Portland in 1973 in defense of individual freedom vs those who admired Chinese, Russian and Cuban societal "discipline" to make a better society.


"Yet in today’s climate set by the revolutionary left in America, metaphysical defenses of man are somehow just a little embarrassing, irrelevant. Even Whittaker Chambers, the ardent counter-revolutionist, would make gentle fun of the inflexible defenders of the individual. Of the late Frank Meyer, for instance, whose implacable book which is called In Defense of Freedom, was current when the Republicans suffered their great congressional defeat of 1958. 'If the Republican Party does not find a way to appeal to the mass of the people,' Chambers wrote me at that time, 'it will find itself voted into singularity. It will become then something like the little shop you see in the crowded parts of great cities in which no business is done or expected. You enter it and find an old man in the rear fingering for his own pleasure oddments of cloth, caring not at all if he sells any. As your eyes become accustomed to the gas light, you are only faintly surprised to discover that the old man is Frank Meyer.'

"I submit to the critics of American Society, if they are really concerned about the restoration of the individual, they should begin by focusing on him and his reliance on the marketplace. Focusing on those oddments of cloth by a familiarity with which a few men know to hesitate not at all when someone asks the question, 'Is it wrong for the State to tell the writer what to write?'. 'Is it wrong for the State to tell the scientist what to study?' Those few who don’t hesitate for a moment to answer, 'Yes, it is wrong. It was always wrong. It is now wrong. It will forever be wrong.'

"The whole subject is strangely, quietly, sadly as we meet so often in America in the college campuses and elsewhere for the purpose of deploring the free marketplace. But, in Russia people go to the only free marketplace available–the black market. And pay their 80 rubles a month wages for a single novel by Solzhenitsyn. And there in Russia, whose rulers denounced the marketplace fifty years ago with a blaze of [indistinguishable] and a rain of bullets aimed righteously at the temples of teenage girls and a hemophiliac boy in a cellar at Ekaterinburg, there in Russia fifty years after the advent of socialism there are old men and old women and young men and young women who transcribe by hand, not for profit, from Radio Liberty risking prison by the very act of listening to it the latest novel of Solzhenitsyn. Word after word. Sentence after sentence. A process that takes them months to complete. Resulting not in thousands, let alone millions, of copies, but in a few dozen or perhaps a few hundred. The oddments of cloth.

"But it is worth it if we are to rescue man from the tools of ideology. Worth everything to preserve those oddments. To make them available to those who are graced with a thirst for them. The books of Solzhenitsyn accumulate even as the disdain for the institutions of freedom perversely accumulates. For an understanding of which paradox we find no help at all in Marx, but a considerable help in Jesus, whose servant Paul observed, “'that though our outward man perish yet the inward man is renewed day by day.'”

The 2018 Statements of Ownership published by the Oregonian in its October 12 and October 14, 2018 issues indicate the continuing slide of paid circulation. 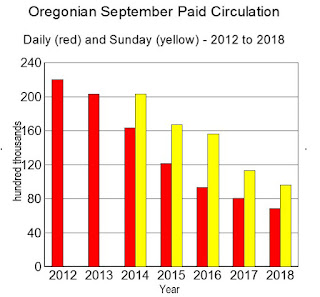 These statistics don't include digital paid circulation, but the steep decline in the print version is not good news for the Oregonian, its employees,  the Newhouse family owners, or Portland.

Portland used to have two thriving daily newspapers, the Oregonian and the Oregon Journal. Now the one remaining is a shell of its former self, not to mention the loss of the Journal.