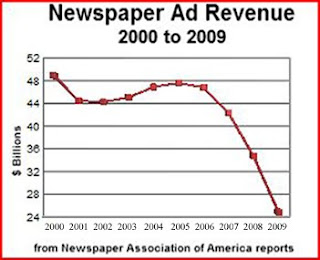 Significant drops in subscribers (the Oregonian lost 11% of its subscribers this last year), the recession, and a host of new media advertising venues (like company web sites) is bad news for newspaper ad income.

New media is faster, easier and cheaper for the reader to access. The same story often appears a day or two later in the local newspaper and as such is at best redundant if not actually superseded by newer reports.

New media also gives access to original sources (especially official reports) as well as a host of secondary sources. That means that readers are able to fact check journalists and spot bias or incompetence. Unfortunately, both have become much too common in newspaper reporting.

The pluses of new media combined with the flaws in current newspaper reporting leave a reading public not much interested in subscribing to newspapers and advertisers paying significantly less to newspapers for access to their diminishing reader base.

McClatchy Watch has two excellent postings and links (here and here) on the importance of the drop in ad revenue to newspapers.
Posted by T. D. at 3:21 PM

I would love to read the Oregonian on a daily basis. But, when they made the change to conform their editorial direction to conforming to the progressive agenda, away from simple reportage, that became impossible.

Those few times that I spend with the O tend to reinforce this brutal fact; there is a lack of education that cripples their reporters' ability to do their jobs effectively. One would hope that someone reporting on statistics or the economy could reflect that education through their work.

Too much of what passes for reporting is pushing a press release.

You can't blame the J-school guys and gals who never learned the math. They were told they'd never need it. And so far, as exemplified by teh "O", that prognostication has been proven true.

Hire a management team that has the skills to accurately report on the phenomena they observe, heck, I'd re-subscribe in a minute.
.

I feel the same as you. One of the pleasures of life used to be reading the newspaper. But, when you can't trust the reporting to be accurate or complete or the account to not have underlying spin, there's not much enjoyment in constantly having to question content. Not to mention wondering why they never seem to ask obvious questions about even big issues let alone common issues (e.g., why Oregon is in the top five in unemployment and what can be done about that).